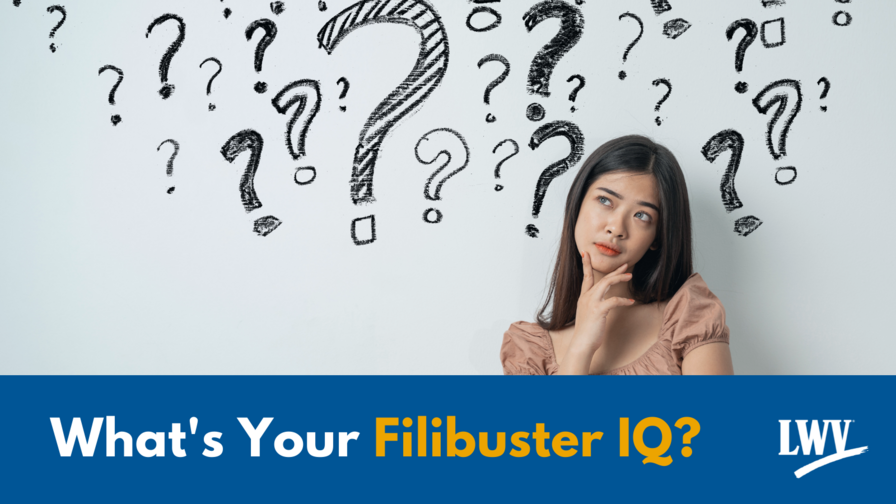 First things first: what is a filibuster?

We talk a lot about filibusters these days, yet we’re not always clear on what they entail.  That’s one reason our CEO Virginia Kase-Solomón broke the process down in a recent blog, describing a filibuster as “a legislative tool used only in the Senate to delay or prevent a vote on a bill, usually through extended debate.”

When learning about this hotly debated process, her blog is a great place to start. But for those who learn best through action or already feel like filibuster pros, we’ve created a little quiz to help you brush up on your intel.

1. What’s the origin of the word filibuster?

A. An Italian word for an insect with a long tongue

B. A Dutch word for pirate, with French and Spanish connections

C. An Old English word for breaking a wild horse

D. French word for an article of women’s clothing

2. Which of these is not correct?

A. The filibuster is a tool used to kill or change legislation in the Senate

B. Representatives used to be able to filibuster, but the House changed its rules

C. Senators used to be able to talk as long as they wanted on any issue

D. The filibuster is in the Constitution

Into the Weeds: Intermediate Level

3. Southern Democratic Senators used the filibuster in the 20th century to do what?

4. When was the term 'filibuster' first used?

5. What does it mean to invoke cloture?

A. Senators vote to amend a bill

B. Senators vote to meet lobbyists to raise money

6. In 1975, the Senate changed the number of votes required for cloture. How many are now required?

7. A group of Southern Democrats staged the longest filibuster in American history against the Civil Rights Act of 1964. How long did it last?

8. US Senator Strom Thurmond of South Carolina holds the Senate record for the longest individual speech. Which act did he spend 24 hours and 18 minutes filibustering, foregoing breaks for food and bathroom use? (Learn more about these acts).

The League has a decade-long history of supporting filibuster reform to ensure a functioning democracy.