Empowered as a First Time Voter

On November 6, 2016, I woke up at 5am and headed to a San Francisco museum, preparing myself for a 12-hour shift as a poll worker. While to some, the job of a poll worker may appear mundane and tedious, I was eager and excited the entire 12 hours.  I spent the day witnessing the joy people experience after dropping their ballot in the bin—our democracy in action.

Although I was only 16 and could not vote at the time, I felt empowered by merely watching others cast their vote. Two and a half years later, on my 18th birthday, I registered to vote with a group of friends. I eagerly awaited my registration card and my new role in our democracy. This past June, I cast my very first vote.When I received my ballot and told the poll workers and voters around me I was a first-time voter, they all expressed their excitement for me. At first, I was a bit surprised. Why were all these strangers so excited that I was voting? But, as I closed the curtain and filled out my ballot, I began to understand their excitement.

My opinions were being counted and could make a difference, each decision I made was crucial.

With each ballot mark, I became more and more proud. I was proud to vote for a candidate whose values aligned with mine and for measures I thought were beneficial to my community. I was a small piece of major decisions that would affect me, my family, friends, school, and city. I finally had a voice in a system that often appeared so distant from me. 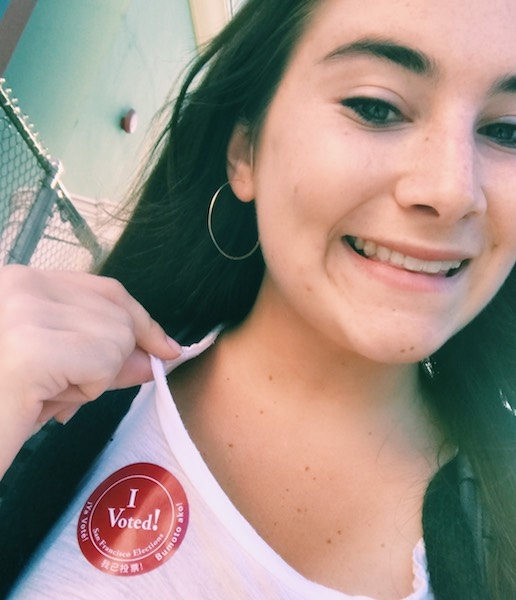 As I walked out of the precinct with my “I voted” sticker, I beamed with joy and excitement. I wanted to tell everyone I walked by that I just voted for the first time. With this joy also came a feeling of responsibility. The responsibility to stay informed, interested, and active in elections. I wanted to encourage everyone to get out and vote.

I believe right now is the most crucial time for young people, like me, to vote. To have pride in our election system and our country, we all must participate, and we must fight for a system in which we can all have access to the polls.

This midterm election will be my first major election, giving me the chance to vote for candidates that will help shape America and my generation. I am proud to be a young voter, and I am proud to take part in our democracy.

LWV Partners with Grammys Brunch to Promote Voting in 2020

Congratulate the graduates you know on their achievement and encourage them to register to vote with our eCard.The League’s eCard directs recipients to VOTE411.org where new voters can easily start the voter registration process.

Our 2016 Youth Voter Registration Program has registered over 4,000 young voters so far! Early data from the Center for Information and Research on Civic Learning and Engagement show that young people are voting in primaries at levels we have not seen for some time.