Fisher v. University of Texas Gets its Second Day at the U.S. Supreme Court 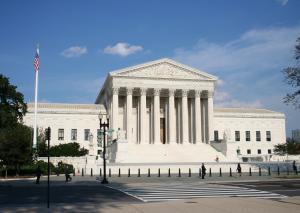 Last month, the U.S. Supreme Court, for the second time, considered the issue of racial equality in education in the case of Fisher v. University of Texas at Austin. Arguments were presented in the reconsideration of a case the Court heard just two years ago. The Fisher case focuses on the admissions policy at the University of Texas at Austin (UT).

The League of Women Voters joined an amicus brief filed by the Leadership Conference on Civil Rights, the Southern Poverty Law Center and 16 other organizations concerned about civil rights and equal access to education. The brief supports the University of Texas admissions policy as necessary in order for students to receive the vast and critical benefits associated with diverse campus environments. While the majority of in-state students are admitted because they rank in the top 10 percent of their class, there is an additional admissions policy for 15 percent of the class that takes into account additional factors including but not limited to community service, extracurricular activities, family responsibilities, socio-economic status and race.

In their 2013 Fisher decision, the Supreme Court affirmed the value of racial and ethnic diversity in educational settings, but questioned the decision of the federal Fifth Circuit. The majority opinion, written by Justice Anthony Kennedy, said the U.S. Court of Appeals for the Fifth Circuit had erred in not applying “strict scrutiny/compelling state interest” to the UT admissions policy. The Fifth Circuit reheard the case, and in 2014, again upheld the University of Texas’s admissions plan. Fisher appealed, resulting in the Supreme Court rehearing the case last month.

The League has long standing positions in support of affirmative action, including access to public education that provides equal opportunity for all. We have fought since our inception to ensure that every citizen can fully and productively participate in American society, from the school room to the ballot box. As in the previous Fisher case, we have joined an amicus in the Fisher v. University of Texas at Austin case because of our long held position that racial and ethnic diversity in educational settings is critical to our country’s democratic institutions and as such is a compelling state interest.

When the Supreme Court upheld the UT admissions policy in 2013, League president Elisabeth MacNamara hailed the decision and noted that “Equality of opportunity is vital if we are to remain an open governmental system that is representative, accountable, and responsive and that assures opportunities for citizen participation in government decision making.” As we await the latest Supreme Court decision in this case, we hope that the Justices will continue to support these key principles.

A decision in this case is expected by June.