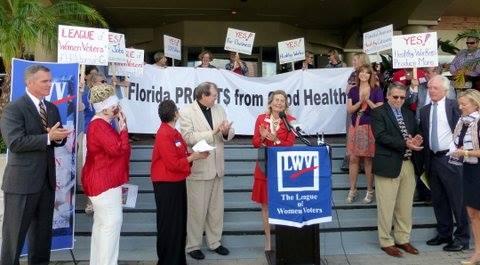 While Florida's elected officials have been at the forefront of fighting the implementation of the Affordable Care Act (ACA), or Obamacare, at the national level – which is hard to believe in a state with the second highest number of uninsured – the Florida League of Women Voters has been at the lead of building a campaign to educate voters and the business community about the economic imperative of getting Florida's fair share of federal health care dollars.

What does getting "Florida's Fair Share" mean? The Affordable Care Act offered federal funding for states to expand Medicaid eligibility to low income workers starting in 2014. Florida has thus far rejected expanding Medicaid through the ACA, which means that Florida taxpayers have paid $51 billion in federal taxes for the purpose of helping the state’s hard-working, low-wage earners yet those monies are currently going to other states that have accepted the Medicaid Expansion funding. If accepted by the state, this funding would be paid in installments for ten years, with the first three years paid 100 percent by the federal government.

Governor Rick Scott voice has been absent on this issue. One year ago he called for accepting the billions, but then did nothing to follow through. During the 2013 legislative session and despite a Senate bill that would have accepted the funding, Florida House Speaker Will Weatherford blocked the federal Medicaid expansion money that would have provided health care to about 1 million Floridians in need of coverage.

The Legislature's refusal so far to take the $51 billion means Floridians like Tabitha Myers will continue to be haunted by uncertainty. The 31-year-old Tampa mother-of-three and her truck-driver husband, Jeffrey, 43, with a monthly income of about $2,000 fall into a gap, which means they won't be able to afford health care coverage, even though the federal dollars are there to help them. Her seven year old son, Charles, aware of the family's problems wrote recently in a social studies paper, "My family is having trouble getting insurance for our whole family. We make too much money to be able to receive Medicaid. We also make too little for Obamacare.”

The Florida League's focus has been on cultivating partners and bracing for a persistent campaign. The campaign, called "Florida Profits from Good Health," reaches out specifically to business communities and small business owners across the state to ensure they both understood the impact of refusing these dollars would have, as well as encouraging and making opportunities for them to have their voices heard. Local newspapers across the state have also joined in the calls for the Legislature to accept the Expansion dollars.

In the summer of 2013, the Florida League worked with the League of Women Voters of Hillsborough (Tampa) and the League of Women Voters of St. Petersburg, and the League of Women Voters of Miami Dade to partner with their local Chambers of Commerce, and hospitals to host press conferences in the districts of the legislative leaders who were leading the effort to refuse the funds. The press conferences featured Chamber Presidents and small business owners who shared how the $51 billion would flow to other states, meaning that Florida taxpayers would pay twice: once to pay for the Medicaid Expansion funds, and again to cover these families when they were left uncovered and forced to get their care in emergency rooms, at a far higher cost. They also highlighted the thousands of jobs that would be lost, citing a study by the University of Florida that reported as many as 122,000 high paying jobs would be added to the state's economy over the next ten years.

In the planning stage is yet another press conference at the beginning of Florida's Legislative Session with local business owners, the Chamber of Commerce and the author of the Senate bill to accept the Medicaid funds under the control of a private nonprofit entity already in existence in the state.

It took five years for Florida to originally accept Medicaid Funds when the federal program began in 1965, so we’re preparing for a long battle. The Florida League won't give up until Florida gets its fair share of health care funding – we know persistence and education will pay off and that Florida can't afford to give up on good health for its citizens.

With 136 organizations, we wrote to Congressional leadership to ask that provisions that promote health care access for millions of people in the U.S. and globally be included in the final budget.