Global Climate Strike March: Attending one of the largest global protests in history

I want you to act as if the house was on fire, because it is.

Many a sign adorned this message at the Global Climate Strike March in Washington, DC on September 20th. The march, spearheaded by girl-wonder Greta Thurnberg, has been one of many across the United States and the world as young people take governments to task over their inaction on climate change.

Several LWVUS staff were present to witness and take part in what is considered to be one of the largest global protests in history. What we saw shed new light on our democracy and sanctity of the rights afforded to us, as children of all ages filled the lawn of the Capitol and the surrounding avenues practicing their first amendment rights.

Halfway through the march, we overheard a few high schoolers being interviewed by a media outlet. Their insightfulness on the impacts of climate change on the poor, agriculture, and cities was so impressive that we stopped to talk to them. One of the students instantly recognized our LWV signs and asked for a voter registration drive at their school to increase voter awareness! Thankfully, one of our rock star organizers was with us and spoke to them about getting something set up. It is always amazing to see how the work of the League fits into so many spaces and appeals to a variety of people of all ages and cultures.

The rally portion kicked off with speeches from indigenous groups of the United States. I have never had the opportunity to hear indigenous groups speak at a rally and was eager to listen. Young women and men of different tribes introduced themselves in their languages, prayed, and sang for us. Most importantly, standing at the foot of the Capitol, they had us all acknowledge the forceful removal of Native Americans from their land across the country, the buildings of our capital city that were built on slave labor, and the disproportionate effects of climate change on marginalized groups at home and around the globe. This type of inclusivity and recognition is crucial to the fight for justice and should never be looked over or forgotten. I am thankful to these people for putting it at the forefront. 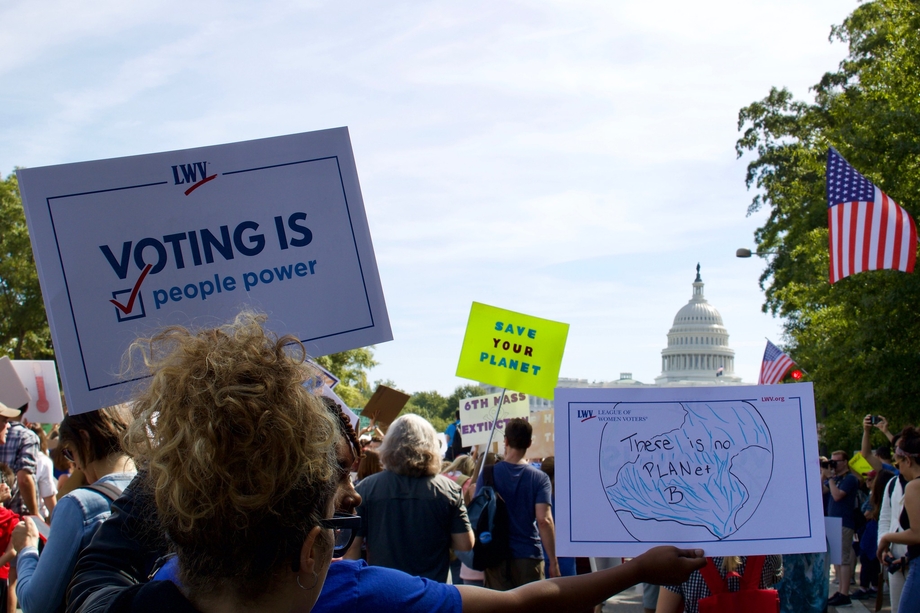 Demonstrating on the lawn of the Capitol and being one of thousands is truly a remarkable experience. You feel the power of your voice. Even completely surrounded by people, I feel that my voice is heard, my point of view is seen, and that I play an important part in elevating the cause that inspired me to march. Seeing the lawn filled with students supported by their families and teachers, was one of the most inspiring and emotional events I have experienced since living in Washington, DC. High Schoolers to primary school students were climbing trees and walls, raising their voices to be heard by those who make our laws.

Carrying our LWV signs and our pride we marched alongside them, asking for governments and corporations to help carry the burden of climate change. Knowing that we were one piece of a protest that counted in the millions across 185 countries only fueled our fire. 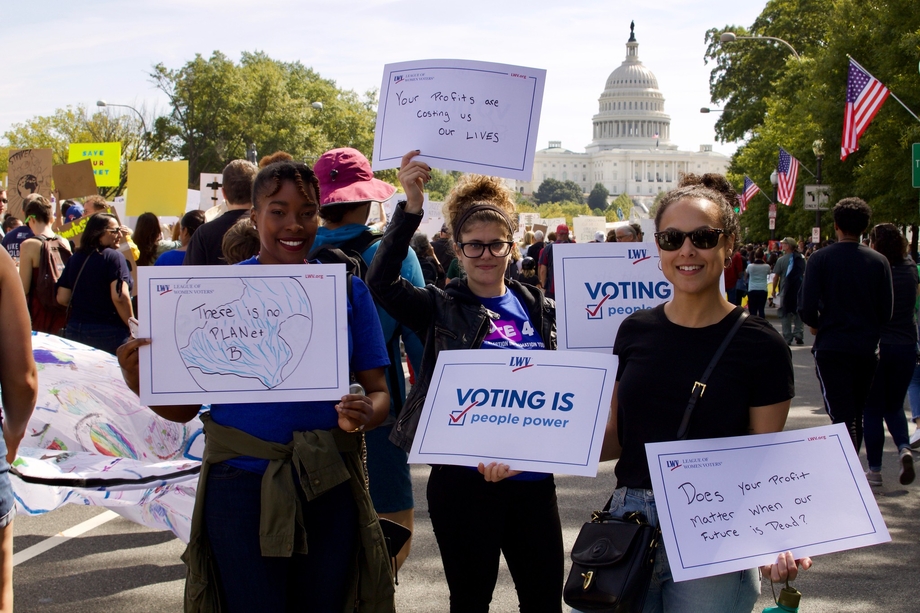