Register to vote - get started now at VOTE411.org
View All Action Alerts
By: Celina Stewart

Honoring the 27th Anniversary of the National Voter Registration Act

Do you remember being the tender age of 27? It’s a bit too far in my rear-view mirror to remember a ton of details, but what I do remember is a sense of buoyancy while also coming into my own and with enough experience behind me to trust that “I got this.” And that’s kind of where the country is with the National Voter Registration Act (NVRA), one of the most transformative laws enhancing voting opportunities for every American. The NVRA has made it easier for millions to register to vote and protect voter rolls from intentional shenanigans or unintentional exclusion.

The story of LWV and the NVRA

In the 1980s and 1990s, the League worked to break down the barriers to voting, first through the reauthorization of the Voting Rights Act (VRA), and then through a campaign for passage and implementation of the landmark National Voter Registration Act (NVRA).

In 1990, LWVEF convened a symposium of scholars, journalists, campaign consultants, and activists to examine the role negative campaigning played in the decline in voter participation along with possible grassroots remedies. The symposium led to a comprehensive effort to return the voter to the center of the election process. A campaign to Take Back the System coordinated League activities to make voter registration more accessible, provide voters with information about candidates and issues, and restore voters’ confidence and involvement in the electoral system. The program included LWVUS efforts on voter registration and campaign finance reform; an LWVEF presidential primary debate; a national voter registration drive; voter registration efforts aimed at young citizens; a campaign watch pilot project to help citizens deter unfair campaign practices; and grassroots efforts to register, inform, and involve voters. The League’s grassroots campaign to secure national legislation to reform voter registration resulted in the 1990 house passage of the National Voter Registration Act (NVRA)—“motor-voter”—but the bill did not reach the Senate that year.

The road to passing NVRA

In 1991, the effort to pass national motor-voter legislation intensified, and the National Voter Registration Act of 1991 was introduced in the Senate. Leading a national coalition, the League executed a high-visibility, multifaceted, grassroots drive, resulting in passage by both houses in 1992. But President George H. W. Bush vetoed the bill and the Senate failed to override. On May 20, 1993, the years of concerted effort by the League and other organizations paid off when both houses passed and President Clinton signed the National Voter Registration Act. The President gave one of the signing pens to LWVUS and saluted the League as “fighters for freedom” in the continuing effort to expand American democracy.

Since 2012, the League has served on the national working committee that oversees National Voter Registration Day, a major national initiative that has brought together thousands of partners to register hundreds of thousands of voters each September. In 2016, more than 350 Leagues from 45 states participated and registered more than 19,000 individuals to vote on National Voter Registration Day. 2019 was the League’s biggest year yet, with Leagues from 40 states hosting over 400 events and registering more than 35,000 individuals to vote—making the League the single-largest on-the-ground participant since the start of the effort. 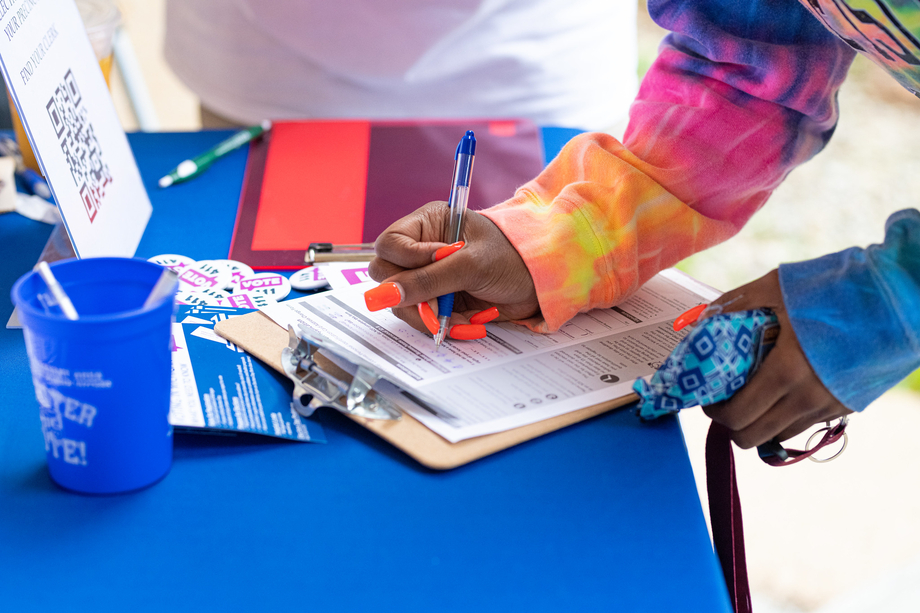 The story continues: LWV, the foremost defender of the NVRA

Since the passage of the NVRA in 1993, the League continues to be the chief defender of the Act. From acting as amici in court to preserve the text and spirit of the law to advocating on behalf of the law with Secretaries of State. Between 2018 and 2020, the League sent letters in at least 14 states. And you want to know how many times were successful? All of them.

Here are some highlights of our work just this fiscal year:

The Texas League pushed back against the state for continued violations of the NVRA requirement that voters be allowed to simultaneously register when seeking a state-issued ID or driver’s license.

The Leagues in Michigan and Detroit filed a motion to intervene as defendants to prevent a voter purge that would be based on unverified data and on its face does not comply with NVRA standard practices and procedures for executing reasonable list maintenance.

The California League moved to intervene as defendants in a lawsuit brought by three California voters seeking to add a “proof of citizenship” requirement to the state’s voter registration process. The League hopes to highlight the importance of NVRA-mandated voter registration opportunities and the discriminatory impact of the plaintiffs’ lawsuit.

The Missouri League and the St. Louis and Greater Kansas City Chapters of APRI filed suit against the Missouri Secretary of State over the state’s failure to provide voter registration services required under Section 5 of the NVRA. Voters whose information is not current would be disenfranchised due to the state’s noncompliance, leaving elderly, active-duty servicemember, and non-white voters especially vulnerable.

And these are just a handful of the cases Leagues are involved with to defend the spirit and text of the National Voter Registration Act. In Fiscal Year 2019, the League engaged in nearly a dozen cases and pre-litigation relating to the NVRA, prevailing in all of them. Just another indicator that LWV continues to be chief defender of the very law we worked so hard to pass.

Well, simply put—keep fighting. There are a few bars from one of my favorite songs that really captures what we are all called to do:

Don’t give up and don’t give in
You will always pass the test
As long as you keep your head to the sky, be optimistic
You can win

There is a reason why the National Voter Registration Act remains buoyant despite challenges. And when the next test comes along, well, we’re just going to arm ourselves with our history and hold this song close to mind as we keep keeping on. Perhaps the lesson for us all is to keep your head high—we can win.

Cheers to 27 years of the NVRA!

Check out more NVRA work the League has done.