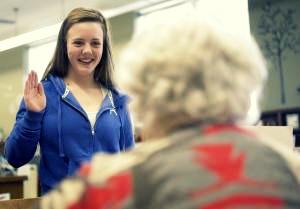 The League of Women Voters of Greater Rockford, located in northern Illinois, has spent decades whipping up enthusiasm for voting and providing voting information to young people. This year we undertook an ambitious program which led to exceptional results – we helped 304 young people register to vote for the first time!

In the early years we were limited to distributing brochures in the area high schools. But in 1984 when the Illinois legislature passed a law allowing League of Women Voters members to become Deputy Registrars, we began registering students in schools. Since then our members have enjoyed registering thousands of new voters. So when the legislature passed a law effective January 1, 2014, that allows 17-year-olds to vote in the March primaries as long as they are 18 on or before the November general election, we enthusiastically began our Youth Registration Project.

Last fall we completed an up-to-date educational pamphlet which includes information about the new law, who can register, what identification is needed to register, where to register, the options for voting before election day (absentee, early or grace period), as well as the offices up for election in the primary and general elections this year. Using a grant from the League of Women Voters Educational Fund, we had the brochures printed as well as new signs to educate our community about suffrage for 17 year olds. We identified 19 area schools in two counties where we could offer to hold registration events.

Despite several feet of snow, frigid temperatures and numerous school closures, we managed to deliver almost 400 brochures to all 19 schools. While teachers were trying to catch up, many of them enthusiastically helped us arrange registration drives in 11 schools before our February 18th deadline. In addition to registering students in school hallways, cafeterias and libraries, we also arranged with area grocery stores to register on one weekend.

In the end we are proud to announce that 15 of our intrepid Deputy Registrars registered 304 young people at 11 schools and four grocery stores in just two weeks’ time! Many of the new voters were 17 years old eager to vote in the March primary. Next up we will be registering for the November election, and in early May we will again offer to register at schools we missed in February.

We have learned some valuable lessons the last few months. Don’t let the weather get you down. Be persistent. Be flexible and open to new methods. Search for enthusiastic help. Despite the lessons learned, one thing remains true: registering young people is one of the most important, gratifying and fun services of the League. We hope we are introducing new voters to a lifetime of voting.