Inspired by the Past, the Georgia League Helps the Voters of the Future 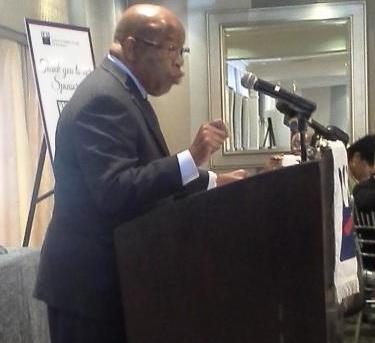 It’s not often that I attend a League luncheon where the keynote speaker receives a standing ovation upon arrival. But on Tuesday, in celebration of the League of Women Voters of Georgia’s annual Power of the Vote! luncheon Congressman John Lewis received just such an ovation. Wherever you live in America, however old you are, the name of Congressman John Lewis is synonymous with courage and a commitment to public service that has advanced the cause of freedom, justice and equality in our country. As he describes those terrifying moments on the Edmond Pettis Bridge in Selma, Alabama or the triumph of standing behind President Lyndon Johnson at the signing of the Voting Rights Act, it is impossible not to be swept up in the fight to make sure that every vote is cast and every vote is counted.

In this election so much is at stake. Here in Georgia, as in so many states, every statewide office is on the ballot and for the first time in over a decade, the race for Governor is up for grabs. Georgia is on the leading edge of change in 21st Century. The population here is increasingly diverse and that diverse population is increasingly participating in the political process. Cooperative efforts of many organizations, including the League, have resulted in a significant increase of the number of registered voters.

Voter registration has closed here as it is in many parts of the country for the November elections. Election officials are now working hard to enter last minute registration data from hand written forms into a variety of computer programs. Even without recent attempts by state elected officials to impose onerous and unnecessary verifications processes, the transcription of information by election officials is labor intensive and fraught with the possibility of error. Secure online voter registration could go a long way to streamlining and improving the process.

In the meantime, as we transition to more modern systems, early or advance voting allows voters not just to cast their ballot at more convenient times and places, it also gives new voters the opportunity to correct any errors that might have occurred in the registration process. With so many new voters here in Georgia, the League and its partners have launched the "Post the Peach" social media campaign to encourage voters to vote early, take a selfie when they leave the polls, post it and tag their friends. As you may know, the peach is iconic in Georgia, and our “I’m a proud Georgia voter” stickers come in the shape of peach. This campaign is an innovative way to encourage voters, especially new voters to get to the polls.

All over the country the League of Women Voters is working to keep this critical election front and center with voters.

Attending the Election Protection convening made me excited for what’s ahead in 2015. I’m looking forward to hearing about the successes that will emerge next year.

For the League of Women Voters of Washington (LWVWA), it was an Election Day we’ll never forget: over one million Washington voters said YES to backgrounds checks on gun purchases.

The League of Women Voters of Wisconsin has been running an election observer program since 2010. Read their guest blog post on their observations from Election Day 2014.