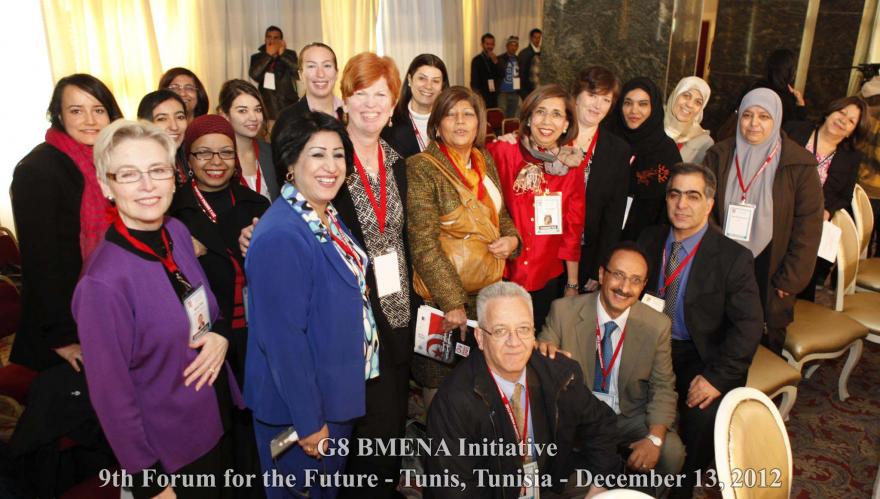 As a champion of women’s suffrage and a key player active in international affairs, the League is pleased today to celebrate International Women's Day (IWD), an annual occasion that honors the economic, political and social achievements of women past, present and future. Celebrated for over 100 years and recognized as a national holiday in a number of countries, IWD shares the League’s commitment to promoting gender equality and global democracy.

The League works on global democracy issues in a number of ways. We are currently wrapping up our year-long 2012 G8 Broader Middle East and North Africa (BMENA) Initiative, which we were proud to announce last International Women’s Day. For BMENA’s 9th Forum for the Future program, we partnered with the U.S. Department of State, the Tunisian American Chamber of Commerce, and ARFORGHE, a Tunisian NGO, to work on issues impacting civil society. Over the past year, we’ve traveled to Morocco, Jordan and Tunisia to help draft a declaration on women’s empowerment, freedom of speech and assembly, and economic governance.

In addition to this major project, last month, the League’s Global Democracy Program  partnered with the Inter-American Dialogue and the International Association of Women Judges to meet with leading international women judges on the importance of gender diversity among judicial leadership positions across the Americas. The League continues to work diligently to pass the Convention for the Elimination of all Forms of Discrimination Against Women (CEDAW) Treaty, which serves as a practical blueprint for each country to achieve progress for women and girls. In 1945, President Harry Truman asked the League to serve as a consultant to the U.S. delegation at the United Nations. We continue in this role to this day with one official and two alternate UN observers. Just this week, our Global Democracy team and UN observer, Rosalee Keech, attended the UN’s 57th session of the Commission on the Status of Women.  The team held a standing room-only event in which international practitioners and U.S. government officials shared how to successfully implement laws to prevent violence against women and girls.

In the League’s nine decades of existence, we are as engaged as ever in helping facilitate democracy both at home and abroad.  On International Women's Day, we recognize the many accomplishments made by a range of activists across the world for women’s equality, as well as the goals yet to be achieved that we will continue to work on in the fight towards equality.

Blog
LWVUS UN Observer Shares Insight Into the High Level Political Forum
This blog post was written by LWVUS's Chief Observer to the United Nations, Rosalee Keech.  As the League’s Chief Observer to the UN, I had the privilege of attending the …
Blog
United Nations Framework Convention on Climate Change
In December, the LWV UN Observer for Climate, Robin Tokmakian, and three Delegates (Rebecca Boyd of LWV Wilmette, IL, and Claudia Keith and Cathy Frischmann of LWV Corvallis…