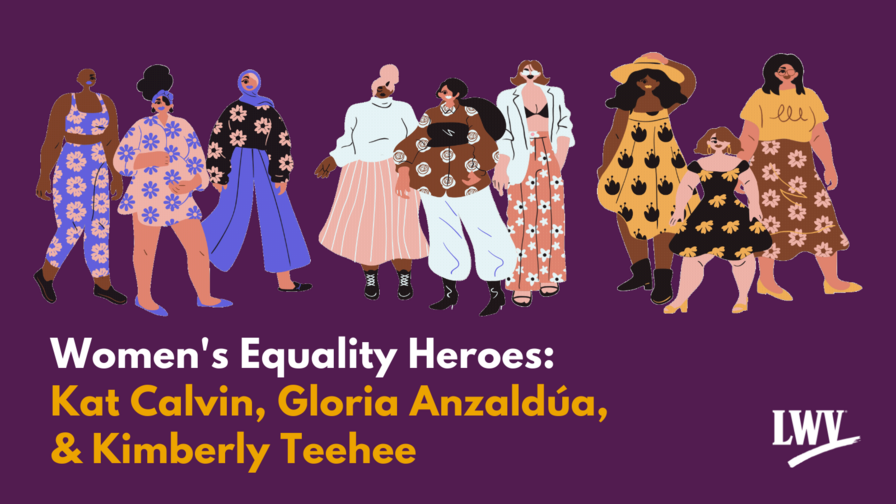 This blog was written by Nancy Pulido, a Summer 2021 communications intern.

For Women’s Equality Day, I wanted to highlight the work of three of my heroes, women who stood (or currently stand) up against misogyny and racism to advocate for social and political equity. Though their work styles are vastly different, each has made our country a fairer, more just place. I hope their work inspires you like it inspires me.

Kat Calvin grew up as a self-described “Army brat”; her first memory of participating in civic action was accompanying her mother to the polls to place her vote for President. While earning her JD at the University of Michigan, she worked with UNICEF as a juvenile justice intern and with the South American Human Rights Commission researching human rights violations.

She has since founded several civic and social organizations, including Blerdology, an enterprise supporting Black people in STEM, and Michelle in Training, a mentoring program for girls in DC. In response to the 2016 election and the anti-voter laws that followed, she founded Spread the Vote, an organization that helps people obtain the IDs necessary to vote. Calvin currently serves as CEO for both Spread the Vote and the Project ID Action Fund.

Project ID Action Fund, which helps Americans obtain state IDs, is one of Calvin’s greatest achievements. Over 21 million Americans don't have an ID, which not only prohibits them from voting but also makes it harder to obtain social services, as an ID is needed for housing, jobs, medical care, and many food banks. Black women are particularly impacted by this issue.

Through her continued advocacy, Calvin empowers Americans to reap the benefits of political and social systems that are often inaccessible. You can follow her on Twitter to learn more about her work.

Gloria Anzaldúa grew up on the US-Mexico border in Texas. Her father passed away when she was 14 years old, requiring Anzaldúa to support the family by working their field while attending high school and college.

Anzaldúa received a BA degree in English, Art, and Secondary Education and a graduate degree in English and Education. After teaching bilingual students and special education, she worked as a professor teaching feminism, Chicano studies, and creative writing. 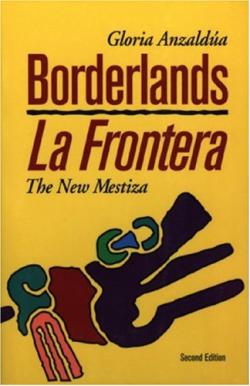 Anzaldúa faced discrimination for her open interest and work in Chicana cultural studies and queer theory. Despite this, she persisted in her studies and wrote and edited several groundbreaking works, including "Borderlands/La Fronters: The New Mestiza," which was loosely based on her own experience growing up at the Mexico-Texas border. Her writing often described living between two cultures, on the literal and cultural borderlines; she coined the term Nepantlera, based on the Nahuatl word “Nepantla” (meaning “the middle”) to refer to people moving within “conflicting” worlds, refusing to align themselves with one world entirely.

Through her writing, Anzaldúa was able to change how people viewed their own sexuality, identity, history, and culture. She played a significant role in guiding the Chicana/o movement and lesbian/queer theory.

Kimberly Teehee: Attorney, Activist, and the First Cherokee Nation Delegate to the House of Representatives

Kimberly Teehee was born in Chicago, Illinois, where her parents had been moved under the Indian Relocation Act of 1956. Her family moved to Claremore, Oklahoma, where Teehee became a member of the Cherokee Nation and grew heavily involved in Cherokee Nation Affairs.

She earned her BA degree in Political Science at Northeastern State University in Tahlequah, Oklahoma, and her law degree from University of Iowa College of Law. Teehee began her political career as an intern for former chief Wilma Mankiller, then became the Senior Advisor to Congressman Dale Kildee of Michigan. Through Congressman Kildee, Teehee was able to serve the House of Representatives’ Native American Caucus.

In 2009, Barack Obama selected her to serve on the White House Domestic Policy Council as the first-ever Senior Policy Advisor for Native American Affairs. In this position, Teehee was able to strengthen the relationship between the United States and tribal nations and create policies that addressed concerns in the Native American community. Notably, she supported the Violence Against Women Act (VAWA), legislation that would hold people accountable for acts of domestic violence against Native American women.

Teehee became the first Cherokee Nation delegate to the US House of Representatives in 2019. The next year, Time magazine featured her as one of 16 activists working towards a “More Equal America.”

Who are your equal rights heroes? Join the discussion on Twitter and be sure to thank those fighting for equality in your community!

Test your knowledge of the 19th Amendment and learn more about the fight for women's suffrage in the U.S. with our interactive quiz!

This week, as we mark the 94th anniversary of the 19th amendment becoming law, let's honor those brave women and men by engaging and empowering all voters to register to vote.

As we celebrate Women's Equality Day and the anniversary of MLK's "I Have a Dream" speech, many Americans - women and men, young and old, rich and poor alike - still face barriers to voting.