One Classroom at a Time: Breaking Down Barriers to the Youth Vote 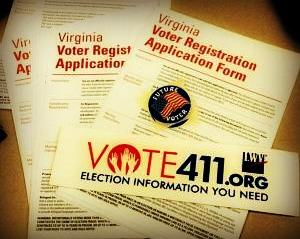 I’ve been a proud League of Women Voters staffer and a local volunteer since 2006. In my work I’ve had the opportunity to work with hundreds of inspiring League volunteers and seen large-scale voter empowerment efforts come to life. But as far as work weeks go, though, last week’s is one for the books.

Last Wednesday morning I headed up to H.B. Woodlawn Secondary Program to help senior government students register to vote for the first time. As my co-volunteers placed blank voter registration forms on students’ desks, they asked a seemingly simple question: Why would anyone want to vote?

“Because of democracy,” said one young man.

“Because it’s cool!” said his classmate. She really meant it.

All in all, the students were enthusiastic about the opportunity to vote. They also had a lot of questions about the registration and voting process. We walked through every single step of the process of filling out the form. And then we talked about the alarming fact that young voters are not turning out and voting in high enough numbers across the country.

The truth is, young people remain sorely behind the overall eligible American population when it comes to electoral participation. This point was hammered home to me when the following day, I attended Campus Vote Project’s summit in Washington, DC on student and youth voting. The event featured student activists and leaders from across the voter engagement community, who shared their thoughts on the current state of student voting rights and challenged participants to improve the status quo.

At that event, I was thrilled to join other young leaders who are standing up—loudly—to counteract these troubling trends. The fact is – barriers exist that are keeping young people from the polls.

Abby Kiesa, Youth Coordinator and Researcher at CIRCLE, reported that in 2012, 61 percent of young people surveyed by CIRCLE reported that they were unsure of their state’s registration deadline. More concerning, many young people report that a big reason they don’t register or vote is simply because nobody asks them to. This is especially true for the millions of young people who don’t go to college.

Some of the reasons for young peoples’ lagging participation are structural—such as a lack of adequate registration opportunities in places where young people gather, shrinking resources for civic education in our schools, and general confusion about the election process. Other reasons are more insidious and less visible: photo voter ID laws, rollbacks to early and absentee voting options, restrictions against student voter registration and last-minute elimination of polling places serving young people are just a few of the suppressive attempts that have been levied against young voters in recent years.

I was particularly inspired by my co-panelist Jessica Injejikian, Charlotte Organizing Fellow of the youth-led NC Vote Defenders. Along with other students, Jessica has stood up for voters’ rights in the fallout from last year’s troubling anti-voter legislation passed by the North Carolina legislature, which would require a photo ID in order to vote, eliminate pre-registration for 16 and 17 year-olds, eliminate early voting days and same-day voter registration, restrict felons’ rights and more. The League and others are currently challenging the law in court; in the meantime, activists like Jessica are taking matters into their own hands by monitoring polling places, speaking out to the media, and making sure other young people understand that their voting rights are in jeopardy.

While there is no question that young people face many challenges when it comes to participating in our democracy, both of my experiences this week give me immeasurable hope for the future. Here’s why – as I headed out of the final classroom visit on Wednesday, a young woman leaned over to her friend: “I feel like such a grown-up,” she whispered. “We’re really going to vote!”