One Year After the Rucho and Benisek Arguments

March 26 is the one-year anniversary of the arguments of the League’s consolidated redistricting cases Rucho v. League of Women Voters. The cases were argued in conjunction with another case out of North Carolina, Rucho v. Common Cause, and was combined with another partisan gerrymandering case from Maryland, Benisek v. Lamone.

Together, the cases set out to give the court a menu of options for establishing a standard that the courts would use to determine partisan gerrymanders in future cases. Partisan gerrymandering is when the lines of state legislative or Congressional districts are drawn in order to help one political party maintain power over the other. Every time legislative districts are drawn this way, in favor of politicians over the people they represent, the people lose. By protecting their own power, politicians effectively rob the people of the power they have to choose their elected officials. 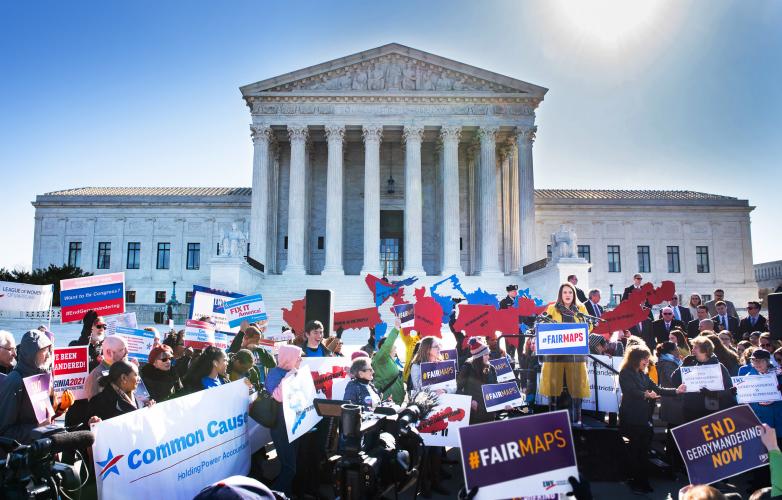 On June 27, 2019, the Supreme Court declined to set a standard to rein in partisan gerrymandering. Chris Carson, president of the board of directors of the League of Women Voters of the United States, called the decision “a disappointment, and the court missed a crucial opportunity to strengthen our republic.” This decision also overturned key victories that the League fought for in Ohio and Michigan related to partisan gerrymandering.

Following the arguments, and the later decision, the League has continued to lay the groundwork for reform at the state and federal levels. In September 2019, we launched the People Powered Fair Maps campaign, a multi-pronged campaign focused on creating fair political maps nationwide. Through the campaign, the League is making an investment in every state and DC to build power around redistricting reform. Through the major focus areas of the campaign which include, ballot initiatives and referendums, protecting state constitutions, state legislative reforms, federal legislative reforms, and civic engagement and education, the League made financial investments in every state League with the goal of creating fair and transparent, people-powered redistricting processes. The overall aim is to curb partisan and racial gerrymandering across the country.

And since then, the League, in every state and DC, has been doing just that. By building a national movement to advance redistricting nationally, the League is growing, wielding, and fostering a shared power paradigm for all voters, to end racial and partisan gerrymandering and ensure our political maps are created by the people – not those in power. We know that when people have direct avenues for influencing the drawing of districts in their communities, voters choose their representatives instead of representatives choosing their voters.

As part of this campaign, a redistricting champion from every state attended a convening in Dulles, VA, to learn and strategize on how they could organize, empower, and mobilize their state Leagues to accomplish the goals of the campaign. Through trainings, breakout groups, and strategy sessions, League redistricting champions came together to build for our common goal of ending gerrymandering.

To date, the League has introduced legislation in nine states around the country aimed at implementing new ways of drawing maps or providing guidelines for legislators to use when drawing the lines. These actions continue the decades-long push that the League has been making for independent, transparent processes at the state level. At the federal level, Leagues continue to work to support the passage of the Voting Rights Advancement Act (VRAA). The passage of the VRAA will ensure that states will not have to endure a redistricting cycle without the full protections of the Voting Rights Act in place. The VRAA passed the U.S. House in December but is still awaiting a committee hearing and vote in the Senate.

Leagues are also leading or partnering in coalitions to lead efforts around citizen backed ballot initiatives in Oklahoma, Nevada, Oregon, Arkansas, Nebraska, and North Dakota. Through this work, Leagues have been drafting language for the 2020 ballots in these states. Leagues are also doing the hard work of collecting enough signatures and educating the public about what these initiatives mean for the people of their states.

No matter the focus of the advocacy or education efforts of the Leagues involved, everyone is focused on building a foundation of success through civic engagement and education. We know, in order to have a successful impact on redistricting efforts at the community level, the people impacted need to be involved. And for people to get involved, they need to be comfortable communicating their needs as individuals and within a larger community with shared interests and values. State and local League leaders continue to be thought leaders and subject matter experts in redistricting while building strong relationships with community leaders. Armed with this expertise and access, state and local Leagues will engage residents in creating awareness about redistricting, its importance, and the impact redistricting has on how their vote is counted. Leagues will do this in their immediate and adjacent communities and in coalition with community partners.

There is much work to be done, but we are marking the one-year anniversary of the Rucho arguments by lifting up how this decision created a unique opportunity for the League to deepen our engagement with members, volunteers, and supporters around the country to build fair maps for all.