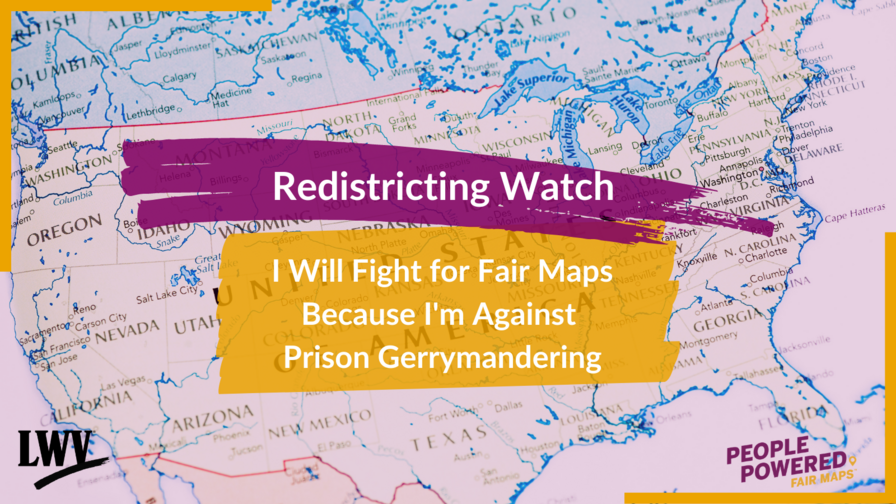 Redistricting Watch: I Will Fight for Fair Maps Because I'm Against Prison Gerrymandering

This blog was written by Patricia Rossi of the League of Women Voters of Connecticut.

For over a century, the League of Women Voters has advocated for expanded access to the polls, carrying out the day-to-day work of registering, educating, and motivating voters to cast their ballots. Through these actions, we fulfil our mission to empower voters and defend democracy. We’re often able to reap immediate rewards, such as a filled-out registration forms and committed promises to vote.

This year, we're working for an outcome that's less immediate in its rewards but just as important to the promotion of democracy. In 2021, we’re focused on ensuring that data from the 2020 Census is used to draw fair, representative maps in every state and D.C. Together with community and organizational partners across the US, we’re fighting for transparency, public input, and inclusivity in the upcoming redistricting process.

In Connecticut, and in most other states, prisons are primarily built and located in white, rural districts. Yet the people living in incarceration facilities come from all over the state and are disproportionately Black and brown. Therefore, the mostly white areas where prisons are located see their population counts inflated and receive more voting representation, while the incarcerated people’s home communities are disempowered.

In Connecticut, Black people account for 11% of the state population, but 41% of the prison population.

Prison gerrymandering is an extension of racist policies. In Connecticut, Black people account for 11% of the state population, but 41% of the prison population. The 14th Amendment says that all people should have equal representation in voting; prison gerrymandering violates the constitution’s one person, one vote standard by diluting the voting power of the incarcerated person for the benefit of the prison district.

For example, in Connecticut, the voting power of a resident of some neighborhoods of urban New Haven counts for only 85% of the vote of a resident in the rural areas of Enfield or Somers. Even more shocking, nine current state representative’s districts would not meet the equitable population level without the inclusion of incarcerated people held in those districts.

As Cheri Quickmire, the Executive Director of Common Cause in Connecticut says, some lawmakers feel they represent the people who are incarcerated in their districts, but they clearly don’t. “This is a question of fairness,” she said. “The current prison gerrymandering system dilutes the votes of Black people and enhances the votes of white people. This is a racist practice.” It’s no wonder that many people who are incarcerated often feel that their bodies are “being used” to help local politicians.

What Can We Do? Educate, Organize, and Advocate!

It’s our job to educate ourselves, our friends, acquaintances, and representatives about prison gerrymandering and its disempowering impact. Education is the first step to getting involved with the advocacy efforts of the League and likeminded organizations.

Join with organizations near you already working on this issue! In Connecticut, we are working with the NAACP-CT, ACLU of CT, Common Cause CT, The Prison Policy Initiative of neighboring Massachusetts, and the Commission on Equity and Opportunity.

We’re also backing legislation like Committee Bill 753, which would adjust population data to count incarcerated persons as residents of their last town of residence rather than as residents of the town in which their prison is located.

We’re also backing legislation like Committee Bill 753, An Act Concerning the Counting of Incarcerated Persons for Purposes of Determining Legislative Districts, which would adjust population data to count incarcerated persons as residents of their last town of residence rather than as residents of the town in which their prison is located. LWV of Connecticut gave both oral and written testimony to support this bill on March 10.

At the same time, we’re working with our allies to find and activate supporters in the legislature. We're also committed to working with the people who are most disproportionately and directly affected by prison gerrymandering, such as the largest cities in Connecticut where many Black and brown communities are concentrated.

For the next three months, our focus will be on advocating for the passage of Bill 753 and ending prison gerrymandering. If you have friends or family in Connecticut, please encourage them to join our efforts.

We can also advocate against prison gerrymandering during our oversight efforts with the Bipartisan Redistricting Committee. There may be roadblocks as we support this issue in the redistricting process. The late delivery of census data may affect efforts to produce fair maps nationwide. We expect the process will be under pressure to attain approved maps on a compressed schedule; and we expect this will invite adjustments to normal practices that could reduce the prompt sharing of timelines, data, planned processes, and plans for public input via hearings and draft map submission.

You have the power to demand a fair redistricting process. No matter where you live, you can advocate for:

You can also urge your Senators to support the passage of the For the People Act, which restores voting rights to formerly convicted felons and advocates for fairer redistricting processes

Many states have already made progress to end prison gerrymandering, and we’re eager to take advantage of the opportunity to right this wrong in Connecticut. Learn more about how you can get involved and ensure that this issue is discussed during the redistricting process by joining our upcoming People Powered Day of Action or finding an event near you.

Together, we can end prison gerrymandering.

The Formerly-Convicted Should Get to Vote. Here’s How the Senate Can Make it Happen.

Formerly-convicted individuals get counted in the census, hold jobs, raise families, and contribute to their communities -- why shouldn’t they have a voice in their representative government?

Blog / March 25, 2021
Redistricting Watch: We Fight for Fair Maps Because We Care About Environmental Justice