Remembering Dr. Martin Luther King, Jr.: Give Us the Ballot! 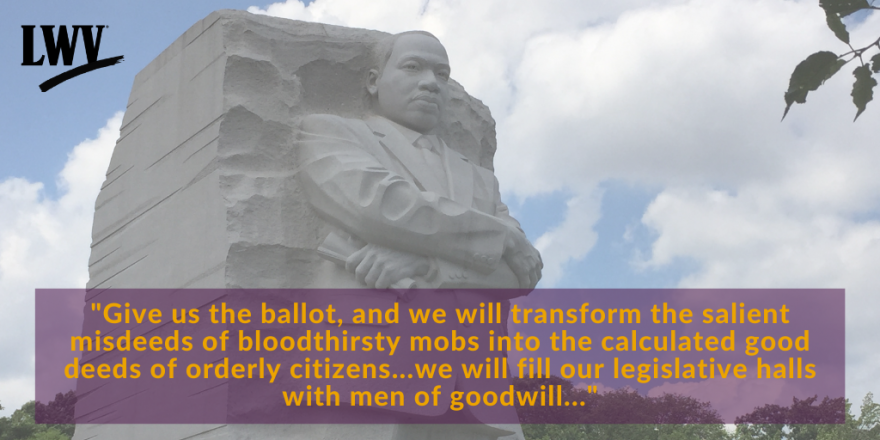 Dr. Martin Luther King, Jr., stood on the steps of the Lincoln Memorial during the Prayer Pilgrimage for Freedom, with a transformative vision for the American South. Dr. King implored both the southern Dixiecrats and Republicans in Congress to fully enfranchise Black voters:

Give us the ballot, and we will no longer have to worry the federal government about our basic rights.

Give us the ballot, and we will no longer plead to the federal government for passage of an anti-lynching law; we will by the power of our vote write the law on the statue books of the South and bring an end to the dastardly acts of the hooded perpetrators of violence.

Give us the ballot, and we will transform the salient misdeeds of bloodthirsty mobs into the calculated good deeds of orderly citizens.

Give us the ballot, and we will fill our legislative halls with men of goodwill and send to the sacred halls of Congress men who will not sign a “Southern Manifesto” because of their devotion to the manifesto of justice.

Give us the ballot, and we will place judges on the benches of the South who will do justly and love mercy, and we will place at the head of the southern states governors who will, who have felt not only the tang of the human, but the glow of the Divine.

Give us the ballot, and we will quietly and nonviolently, without rancor or bitterness, implement the Supreme Court’s decision of May 17, 1954.

Unlike many legislators in Congress, Dr. King was not afraid of what the South would look like if everyone were enfranchised, from those living in poverty, to those who have committed felonies. Dr. King understood that full integration of Black people into American society required bold moral leadership which sought to enforce the First Amendment right to vote equally and without qualification, and he committed his life to this mission.

So, what happens when the right to vote is unencumbered by suppression? We elect the first Korean-American women, first millennial Senator, and the first Black woman to represent Missouri to Congress. When we give all citizens a voice, our government more accurately mirrors the rich diversity of the communities we live in and we no longer celebrate “firsts,” but embrace the heterogeneity inherent in our nation of immigrants.

Reflecting on Dr. King’s speech, we should ask ourselves, who is afraid of a truly diverse electorate and government, and why? This question should be in the front of our minds as we embark on a season of redistricting where broad and diverse coalitions of citizens seek to transform and liberate heavily gerrymandered states by drawing maps which keep communities with common cultural, ethnic, and historical bonds together, amid resistance from politicians who seek to protect their own professional and economic interests, above all else. When we all have unfettered access to the ballot and the right to elect our candidates of choice, we move closer to Dr. King’s vision of a more just democracy.

As we pause to honor the life and legacy of Dr. Martin Luther King Jr., let us remember his lifelong passion and commitment to securing equality for all in American society.

Blog
Why "We're Not About to Turn Around": Honoring Martin Luther King's Fight for Voting Rights

"As we honor Dr. Martin Luther King today, we are in urgent need of legislative fixes to realize his vision that every American is treated fairly at the ballot box," writes LWVUS President Elisabeth MacNamara for the Huffington Post.