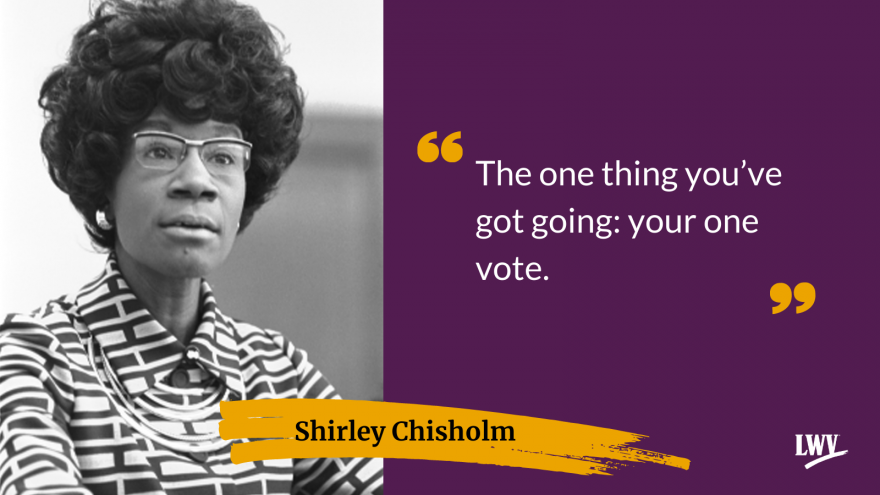 In light of our organization’s 101st birthday this month, I’ve been reflecting on the work of some prominent members in our history. As our birthday falls during Black History Month, I naturally think about Congresswoman and activist Shirley Chisholm. As the first African American woman in Congress and the first African American woman to run for president, Chisholm’s work and legacy are endlessly inspiring. The fact that her activism began in part with a League of Women Voters membership in New York City makes her my personal League of Women Voters hero.

As an educator in New York during the 1960s, a young Chisholm began a life of community activism by joining organizations working against discrimination in the civic space. Along with the League of Women Voters, she became a member of the NAACP and the Urban League.

After winning election to the New York State Legislature in 1964, she once again made history by becoming the first African American woman elected to the United States Congress in 1968. In the House, she made huge strides for racial and gender equality, hiring an office staff made up entirely of women, half of whom were African American, and co-founding the Congressional Black Caucus and National Women’s Political Caucus. As a Representative, she garnered the name “Fighting Shirley” by introducing over 50 pieces of legislation during her tenure, much of which centered around services for children and the poor.

In 1972, Chisholm announced her bid for the presidency, stating, “I am the candidate of the people and my presence before you symbolizes a new era in American political history.” By doing so, she became the first African American candidate for a major party's presidential nomination, and the first woman to run for the Democratic Party's nomination. While campaigning, she fought against discrimination and lack of respect as a viable candidate. Despite these struggles, she received primary votes in 14 states and achieved fourth place in the tally of Democratic delegates.

Throughout her public life, Chisholm characterized her work with an appreciation of her distinct voice as a woman of color in a field of mostly white men. One of my favorite quotes of hers, I think, embodies the League of Women Voters at its best: “If they don’t give you a seat at the table, bring a folding chair.”

I’m proud to call Congresswoman Chisholm a fellow League member, and I remain forever inspired by her fearless leadership and advancement of democracy.

This Women's History Month, we're highlighting some of our most prominent members. These women made great strides toward a more perfect democracy and inspire us to work toward the same goal.

Blog
100 Years Since Women Won the Right to Vote, a Woman Is Elected to White House Office