On the Shoulders of Giants: National Volunteer Week 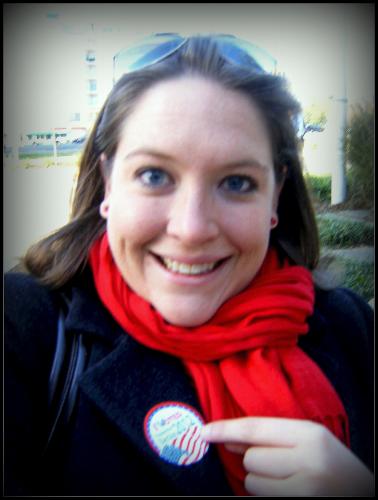 It’s one of my favorite weeks of the year – National Volunteer Week! Here at the League of Women Voters of the United States, this is a time to reflect on the brave volunteers who fought for women’s access to the vote—and through doing so, first formed the League of Women Voters 95 years ago. It is also a time to take a moment to share our deep appreciation for the fierce women and men who are continuing that fight on new fronts today.

In 1920, the women who founded the League were facing a major challenge: how to get America over the finish line of securing women the right to vote once and for all. The landscape was starkly different than it is today—indeed; it was an age before social media, TV pundits, conference calls and email. And yet, our founders knew that they had something powerful in their hands: an unrelenting cadre of women who were organized, determined, and ready to finish the fight. Yesterday and today, regardless of societal advances, these are the ingredients that matter most.

It was these same tenacious League volunteers who would later stick around to make sure millions of newly enfranchised women had the knowledge and the tools to actually use their new-found right to vote; it was their protégés who would go on to forge the founding of the United Nations, drive the earliest campaigns for clean air and water in our country, organize the first televised presidential debate and see monumental voting rights advances like the National Voter Registration Act over the finish line.

Today’s League volunteers—myself included—stand on the shoulders of giants. Their passion pumps through the veins of the brave League leaders who are fighting—and winning—state voter discrimination battles right now. Their legacy drives us to think bigger and fight harder for every eligible voter who deserves the chance to participate. Their focus, on empowering millions of Americans to make the most of their democracy, is the same focus that continues to propel our work forward today.

Last week, I sat with our national president, Elisabeth MacNamara as she connected state League presidents on conference calls to share their experiences with their state’s legislatures.

Established in 1971, Lobby Corps convenes for briefings on League legislative priorities. They play a key role in promoting League issues and communicating our positions to Congress.

Blog
A Proud Tradition of Volunteers – Thank You!

A passionate volunteer mentality is in the League history, it’s in our blood. And I see it every day when I come to work and interact with the state and local Leagues across the country.