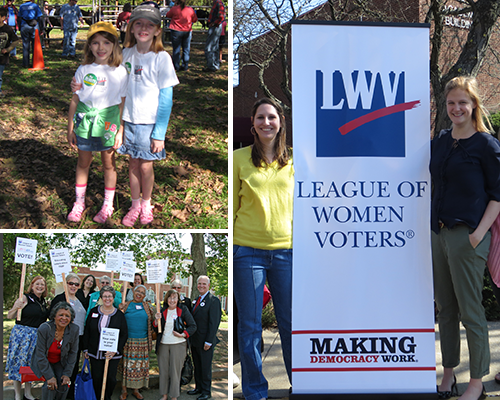 Last week, I had the honor of sitting with our national president, Elisabeth MacNamara as she connected state League presidents from nearly all 50 states on conference calls to share their experiences with their state’s legislatures. President MacNamara as well as the presidents of state and local Leagues all volunteer their time to serve in leadership roles with the League.

On our calls, not only was I struck by the depth of information the state presidents shared about the various policy issues they’ve been working on, but also the relationships they were able to leverage with legislative power players to advance strategies to protect citizen interests in our democracy. For example, the presidents of Georgia, Virginia and Ohio shared their recent victories on protecting voting rights in their respective states. In each of these states, the League was an active leader to oppose legislation that would limit citizens in each state’s ability to exercise their right to vote.

The president of New Mexico also had good news to share. Not only did the League of Women Voters of New Mexico help defeat a range of voter photo ID bills (PDF), the legislature in New Mexico also passed an online voter registration bill. The New Mexico League testified at every hearing and worked with their coalition partners to ensure the bill would be signed into law. State Senator Daniel Ivey-Soto, a League member from Albuquerque, is the head of the New Mexico Clerks Association and former head of the Elections Bureau at the Secretary of State's office and brought his expertise to the work on these fronts. Leagues across the country are leading the charge for online voter registration, particularly proposals that allow for all eligible voters, not just some, to register online.

These volunteer leaders also shared state League efforts to protect the environment, support public education, expand Medicaid and health care options, and monitor state budgets all with the citizen interests over special interests in mind. In a week where we celebrate volunteers for their contributions, I’m so proud to be part of a nationwide network through the League of Women Voters that essentially powers our impact through the hands of smart, dedicated and effective volunteers in nearly 800 communities and all 50 states. A hearty thank you to all of our volunteer leaders!

Action on voting rights in 2016 looks very similar to last year. On the whole, states are passing less restrictive election laws, and even better, more and more states are reforming their election process to help voters.

President Obama delivered his final State of the Union address, and discussed the need to invest in civic engagement and improve our voting and elections systems. Check out our Storify as the League and our supporters live-tweeted the speech!

"The League is pleased to have the power of the presidency behind reforms that lower barriers to voters and help us work toward a more perfect democracy," said President MacNamara.