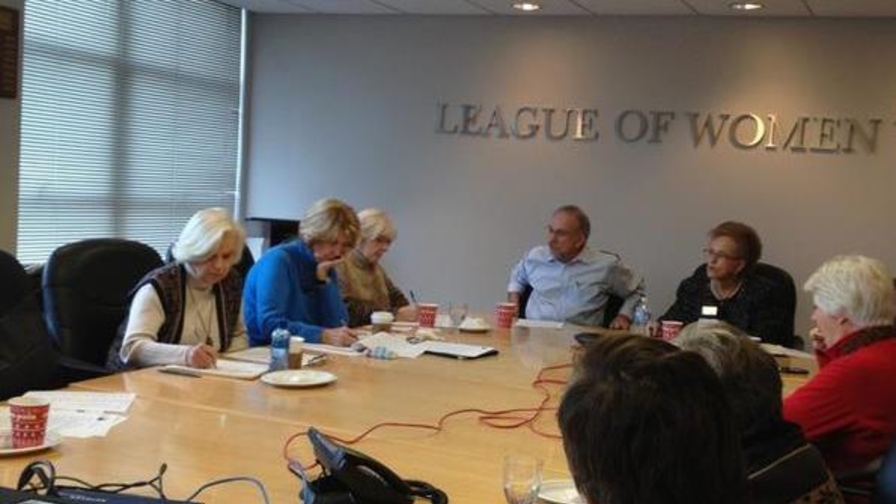 Happy National Volunteer Week to League members and volunteers across the country! The League is a true grassroots organization run by volunteers at all levels. Whether it’s advocating for local or national issues, registering new voters, or educating communities about an upcoming election, everything that our League volunteers carry out is important. The tireless effort and work that you contribute every day in the name of the League makes us a successful organization.

I work with a variety of League volunteers every day, but each month, I have a unique opportunity to work with a group of dedicated League members as part of the LWVUS Lobby Corps. Established in 1971, Lobby Corps numbers between 20-25 members drawn from Leagues in the National Capital Area. Lobby Corps convenes once a month when Congress is in session for briefings on League legislative priorities. As part of these briefings, Lobby Corps members receive assignments to lobby select members of Congress. The Lobby Corps plays a key role in promoting League issues and communicating LWVUS positions to members of Congress. Following these Hill meetings, they report back on their conversations to LWVUS staff and state League presidents. The work of Lobby Corps members is invaluable and increases the influence that the League has on Capitol Hill.

During the 113th Congress, the Lobby Corps, chaired by Carole Conors, visited Hill offices on a number of priority issues, including defending the environment from the damaging effects of climate change, protecting voting rights and reforming our campaign finance system. These volunteers also worked hard in the uphill battle to pass gun safety legislation in the Senate. Most recently, the intelligence they have been able to collect around the Voting Rights Amendment Act of 2014 has been helpful to our coalition lobbying efforts and in the League’s grassroots lobbying in the states.

I’m grateful for the work of members of the LWVUS Lobby Corps accomplish on and off Capitol Hill. The energy and enthusiasm they have for their work energizes me too. The relationships they are building on the Hill and the conversations they have on priority issues are important to the work of the League. I’m proud to say that I work with these dedicated volunteers.

On the Shoulders of Giants: National Volunteer Week

Blog / April 17, 2015
The League’s Volunteer Leaders – A Vital Citizen’s Voice in Our Democracy

Last week, I sat with our national president, Elisabeth MacNamara as she connected state League presidents on conference calls to share their experiences with their state’s legislatures.

A passionate volunteer mentality is in the League history, it’s in our blood. And I see it every day when I come to work and interact with the state and local Leagues across the country.