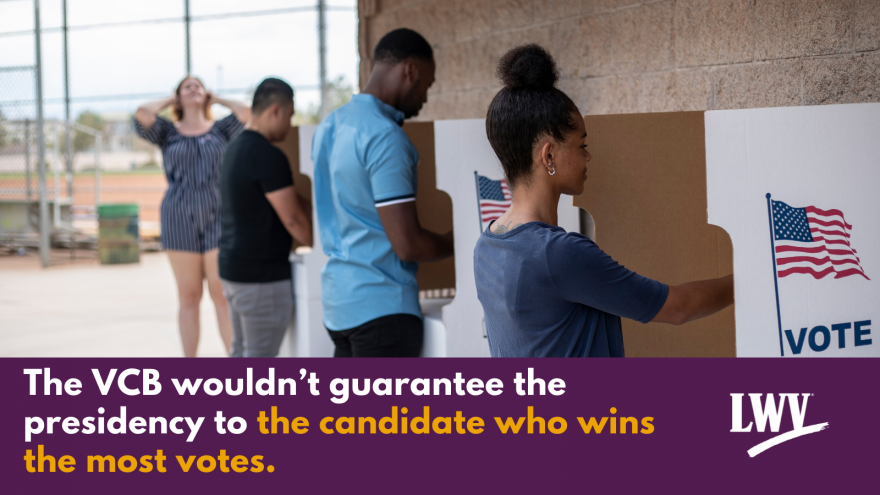 This blog was written by the LWVUS National Popular Vote Task Force.

The "Voter Choice Ballot" (VCB) is a new proposal for electoral college reform advocated by “Making Every Vote Count” (MEVC).  With enough ‘yes’ votes, a state acting under the VCB would award its electoral votes to the candidate who’d won the nationwide popular vote, contingent upon voters’ responses to a ballot question (see below).

This is different from the National Popular Vote Interstate Compact (NPVIC), which has states award their electoral votes to the winner of the popular vote outright (i.e. voters are not asked the question below). The NPVIC would only go into effect when the states in the Compact collectively represent a majority of the electoral votes (at least 270 of 538), thus guaranteeing the presidency to the national popular vote winner. No such guarantee exists with the VCB proposal.

Under MEVC’s proposed VCB plan, a voter would first vote for President and then vote on the following ”yes/no” question:

“Do you want the candidate who receives the most votes in the nation to become the President? If you do, fill in the oval next to YES.”

After the voter answers, the following statement is provided:

“The state will count the votes for all those who filled in the YES oval as cast for the winner of the national popular vote for the purpose of appointing electors as otherwise provided by this state’s law.” 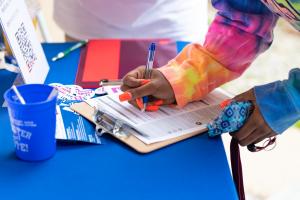 The vague phrase “as otherwise provided by this state’s law” means that the vote just cast for President will be subtracted from the chosen candidate and added to the candidate that the voter just voted against if: (1) the opposing candidate is ahead nationally, even if (2) the voter’s choice is ahead in their state.

Two of the significant reasons the LWV has both opposed the Electoral College for more than 50 years and supports the National Popular Vote (Interstate) plan are:

The Voter Choice Ballot (VCB) proposal does not guarantee either of these goals. We trust that the group putting the plan forth (Making Every Vote Count) has a purpose that is admirable and well-intended. Nevertheless, we find major weaknesses with the recently developed system.

Simply stated, this proposal would prevent all votes from being equal and wouldn’t guarantee the presidency to the candidate who wins the most votes in all 50 states and DC.

Our Concerns with VCB

In the League, we see a continued struggle to clarify the differences between the Electoral College and using the NPVIC; we believe another such plan (and one with numerous weaknesses) would cause even more confusion. Advocacy for the VBC will, at the least, cause confusion about what could be achieved through the NPVIC, and at the worst aid the continued use of the Electoral College as it currently stands.  Either result jeopardizes our goals as outlined above, particularly ensuring that every vote is equal.

Learn more about our opposition to the electoral college and support of the NPVIC .

Blog
The Electoral College: What is it good for?

Next week, the Electoral College will convene as is required by the Constitution to formally elect the next president and vice president of the United States.

Blog
Who Will Elect the President? The Electoral College System

Blog
We've Voted: What Happens Next?