Register to vote - get started now at VOTE411.org
View All Action Alerts
By: Megan Brown 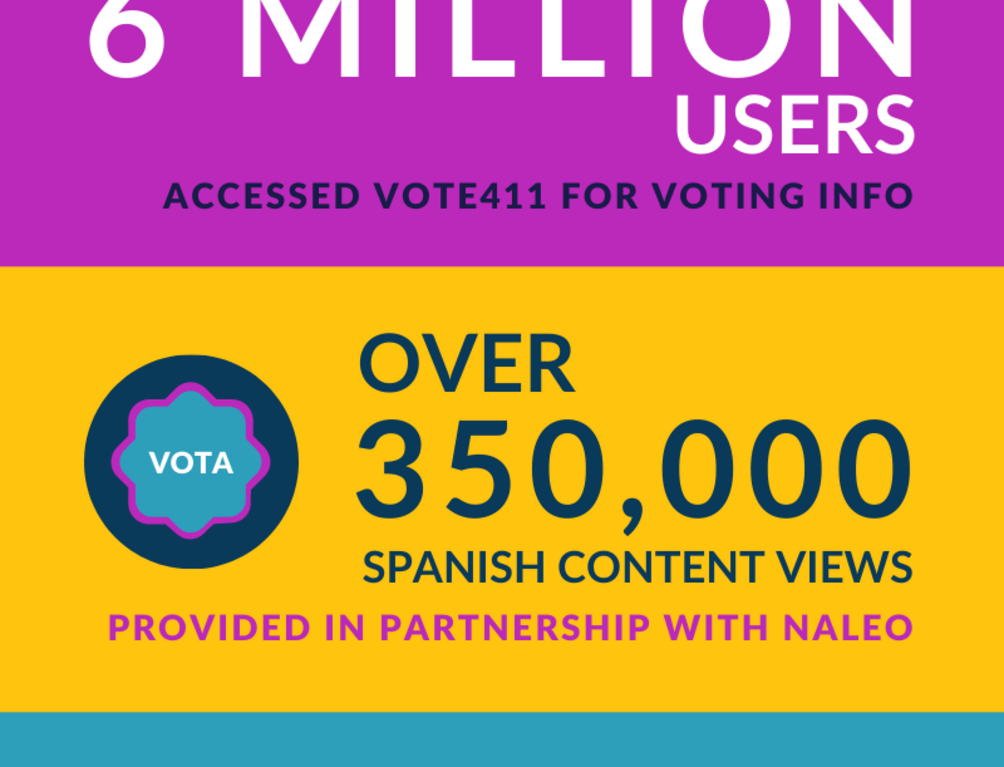 That’s about 1.5 million more users than four years ago.

Of the more than 6 million users, nearly 5.3 million of them viewed more than 37 million pages to see exactly what would be on their ballots. These users utilized our candidate guides to research what the candidates had to say in their own words about the issues and compare their positions in more than 22,000 races in all 50 states.

Ahead of this critical election, the League redesigned VOTE411 to be able to support more voters than ever before. We added new features including a ‘check your registration map’ which more than 300,000 used in just the last two months of the election cycle. Our registration tool saw more than 170,000 users, including 55,000 in October just before registration deadlines hit.

A long-term dream of ours since VOTE411 first launched more than a decade ago, was to make our nonpartisan election information accessible in Spanish. This year, that dream came true. With our partner organization NALEO, National Association of Latino Elected and Appointed Officials, we translated the critical last-minute COVID related changes all voters faced as well as all the state-specific election information in targeted states during the primary season. The fully translated Spanish language content launched in September. With just two months before Election Day, more than 110,000 users accessed more than 350,000 pages with Spanish language election content.

57% of our more than 6 million website visitors identify as female according to Google. More than half of our users are between the ages of 18 -44. Our users found VOTE411 so engaging, they spent an average of 5 minutes on the site and averaged more than 5 pages per visit. We supported voters in all fifty states but saw the most website traffic from the following states: Texas, New York, Florida, Michigan, California, North Carolina, Georgia, Massachusetts, Ohio, and Illinois.

In addition to finding election information and researching candidates, more than 2,000 users also signed up to learn more about becoming a poll worker. Through our partnership with Power the Polls, we connected these interested individuals with their local election officials to play an important role in administering elections all over the country.

We thank our partners for helping spread the word and reaching millions of voters and look forward to continuing to build and grow this essential election service to serve more voters every election.

LWV and VOTE411 team up with HBCU Alumni Alliance to prepare voters in an election year.