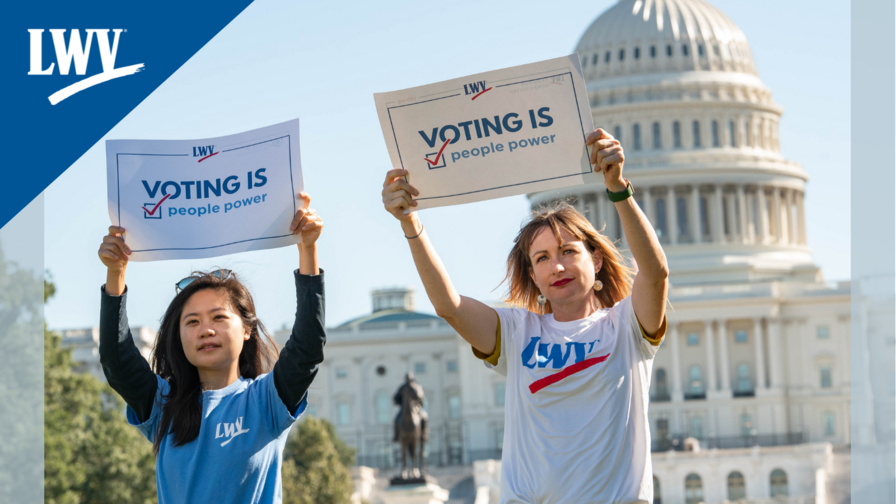 Voting Rights Legislation Showdown in the US Senate

The United States Senate has canceled its January recess to bring Senators back to Washington to debate and vote on voting rights legislation. This follows months of pressure from the League and other activists to protect the freedom to vote.

Our country is in the middle of a desperate fight to safeguard our democracy. On Tuesday, January 11, President Biden and Vice President Harris traveled to Atlanta, where they delivered powerful speeches asking members of Congress which side of history they want to be on and pushed them to pass voting rights legislation. In doing so, they finally stepped into the role that the League has been begging them to fill for the last eight months, putting the full weight and power of the White House behind protecting our democracy.

Following the speeches, Senator Schumer announced the vehicle he would use to get the voting rights bill to the floor for debate for the first time in this session of Congress. A bill, originally the subject of legislation related to NASA, has been floating back and forth between the House and Senate since December. The House substituted new legislation that includes the Freedom to Vote Act and the John Lewis Voting Rights Advancement Act legislation to fill the bill number and renamed it the Freedom to Vote: John R. Lewis Act.

Through a little-used procedure in Congress, the House passed the amended bill back to the Senate as a “message,” which allows them to proceed to the “message” on the floor with a simple majority vote. This is the legislation that the Senate will be able to bring to the floor with a simple majority vote, bypassing the 60-vote threshold or cloture, and beginning debate on voting rights for the first time in the Senate.

HR 5746, the Freedom to Vote: John R. Lewis Act combines the provisions of the Freedom to Vote Act that will set national standards for how voting and elections are conducted and the provisions of the John Lewis Voting Rights Advancement Act that will end discrimination in voting. Broadly, the bill will ensure that voters can safely and freely cast their ballots, stop partisan gerrymandering, and limit the influence of dark money in politics so that billionaires cannot buy elections.

Originally, Senator Schumer intended to act on the legislation by the MLK holiday on Monday, January 17th. Due to incidents outside of Senate control, like a pending snowstorm and COVID-19, Senator Schumer had to delay action in the US Senate.

State legislatures around the country have introduced hundreds of bills designed to create barriers that prevent Black, brown, Indigenous, and other voters from casting their ballots. Right now, redistricting processes across the country are underway that will determine how marginalized communities are represented for the next decade. This is the first redistricting cycle without the full protection of the Voting Rights Act, and some states are using this discrepancy to create safe seats and protect their own political interest, often to the detriment of communities of color. Without national standards for voting and elections as we approach midterms, voters are at risk of losing their freedom to vote.

Momentum is on our side, but we are not across the finish line yet. The Freedom to Vote: John R. Lewis Act will go to the floor of the Senate this week for thoughtful consideration and debate, but we still need to find a way to bypass the filibuster rule and pass this meaningful legislation for the American voters. All Senators, regardless of their political party or views on the filibuster need to hear from their constituents.

LWVUS urges all  House Representatives to vote for the legislation HR 5746, the Freedom to Vote: John R. Lewis Act, and move it to the Senate for immediate consideration and debate.

Today the League of Women Voters of the United States CEO Virginia Kase Solomón issued the following statement on the Senate action on voting rights.