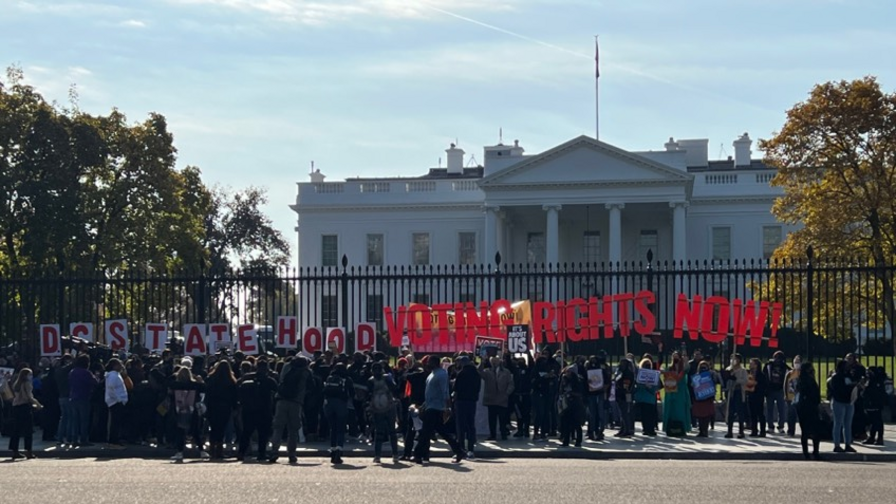 Washington, DC — Hundreds of voting rights activists escalated demands for the White House to act on voting rights today, in an action that resulted in the arrests of some 200 participants.

With approximately 800 protestors in attendance, the demonstration is the fifth and largest in a series aimed at spurring the White House to take action to get the Senate to pass both the Freedom to Vote Act and the John Lewis Voting Rights Advancement Act. Both pieces of legislation have been blocked in procedural votes.

Today’s action follows a previous demonstration at the White House on Nov. 3 at which more than 50 activists were arrested, and an earlier demonstration on Oct. 19 at which 25 activists were arrested. Events have been led by the League of Women Voters of the United States, People For the American Way, and the Declaration for American Democracy. The event featured participants from around the country, including faith leaders, civil rights activists, young elected officials, labor leaders, and students. Activists traveled from locations including Atlanta, Augusta, Baltimore, Charlottesville, Chicago, Cleveland, Detroit, Hartford, CT, Minneapolis, New York City, and as far away as California, Florida, Massachusetts, South Carolina, and Wisconsin.

Those arrested include three LWV national board members and 10 League members who traveled to DC for this action.

“Today we stand as a united coalition, exercising our right to peacefully protest and send a message to our President that the clock is ticking to protect voting rights. Mr. President, we are counting on you to be the voting rights leader our republic needs,” said Virginia Kase Solomón, CEO of the League of Women Voters of the United States.

“Redistricting is underway without the full protection of the Voting Rights Act, and midterm elections are around the corner. We are here today to send a message that President Biden must take action now to ensure the promise of our democracy and protect our freedom to vote,” said Dr. Deborah Ann Turner, board president of the League of Women Voters of the United States.

“For months now we have been bringing our message about voting rights to the president’s doorstep at the White House. We started on a sweltering hot day in August and now we’re here with Thanksgiving right around the corner. During that time we’ve seen Senate Republicans repeatedly block voting rights legislation, and the president has yet to bring the full force of his office to bear to break this impasse. That’s just unacceptable. We are demanding that President Biden do what the American people elected him to do and use the power of his office to stand up for our fundamental rights. It’s time for President Biden to exert all the influence at his command to get the Freedom to Vote Act and John Lewis Voting  Rights Act passed in the Senate, or millions of Americans — especially Black and brown Americans — will be stripped of their right to vote on the eve of the midterm elections,” said Ben Jealous, president of People For the American Way.

“Time is running short for the Senate to pass and send to President Biden’s desk critical voting rights legislation to ensure every eligible American can safely and easily vote in the next election. We need President Biden to use the full power of his office to move the Senate to act and protect our freedom to vote. That’s why I’m risking arrest again. With disinformation on the rise, state legislatures enacting anti-voter bills, and election officials experiencing harassment, we urgently need national standards for voting to protect our democratic institutions and ensure election officials have the tools and resources they need. It’s time for President Biden to prioritize delivering the Freedom to Vote Act and John Lewis Voting Rights Advancement Act to the American people and protect our right to vote,” said Jana Morgan, director of the Declaration for American Democracy.

“The filibuster has been used throughout history to block civil rights, anti-slavery laws, women’s rights laws, and labor laws. Once again, today, it is being used to block voting rights protection laws, block living wages, block expanding health care, and it’s wrong. The current filibuster may be even worse than how the filibuster has been used in the past. It’s a coward filibuster where senators don’t even have to stand up and defend it. The nation needs to end the filibuster and center attention on the people, especially the 140 million poor and low-income residents in the richest country in the world,” said Rev. Dr. William Barber II, co-chair, Poor People’s Campaign, and president and senior lecturer of Repairers of the Breach.

“With every day that democracy is deferred, the hope for change — the hope that carried millions to the ballot box to support Joe Biden — fades. While Democrats delay, disinformation and despair are taking hold. If President Biden really wants to achieve the mandate he won from the American people, he will step outside that Oval Office and walk down Pennsylvania Avenue to make clear to Senate Dems that it is past time to Fix or Nix the Filibuster. If he doesn’t know the way, there are hundreds of people here today and thousands more phoning into the White House, who are willing to show him,” said Charly Carter, executive director of Democracy Initiative.

“Today marks the fifth time with our friends at People For and LWV and sixth time since July, that we've taken our message to the Biden White House — and the fourth time we've been arrested for protecting our God-given right to vote. But despite our demands for federal voter protections, officials in Washington have failed to deliver. We will continue to be in the streets fighting for our voting rights until President Biden and Senate Democrats take action. Instead of spending time and energy trying to end our movement, the White House should be using that energy to end the filibuster,” said Cliff Albright, co-founder and executive director of Black Voters Matter.

“Our democracy is under attack. Republican lawmakers have introduced and passed thirty-three state laws designed to suppress the vote of millions of people of color and open the door to overturning elections. Federal voting rights legislation would answer these attacks and protect our democracy, but the filibuster has been used to block its advancement. As Jews, we know what the slide into fascism looks like. We call on the President to act now to use the full power of his office to end the Senate filibuster rule and get the Freedom to Vote Act and the John Lewis Voting Rights Advancement Act passed this year. Democracy can’t wait,” said Ann Toback, CEO of The Workers Circle.

“The right to vote is not only enshrined in the Constitution as a fundamental tenet of American citizenship, but it’s also necessary if America wants to keep considering herself a functioning democracy going forward. However, the threat to suppress the vote of certain communities is real and growing and Congress and President Biden must act with all due speed to protect it. Voting rights, including those of the 700,000 disenfranchised residents of Washington, DC, must be guaranteed by the federal government now. If all Americans, particularly those that live in DC, aren’t given the ballot, no one truly has freedom and justice,” said Bo Shuff, executive director of DC Vote.

“The same fossil fuel billionaires who are polluting our air and water, are also polluting our politics by spending millions to push their toxic agendas, elect their allies, and keep anyone who disagrees with them blocked from the polls. Black and Brown communities, working families, and the health of the planet, suffer the worst consequences. We need President Biden to use the full power of the presidency to bring lawmakers together and ensure the passage of the Freedom to Vote Act and the John Lewis Voting Rights Advancement Act before it’s too late. The stakes are too high for our country and planet,” said Ebony Twilley Martin, co-executive director of Greenpeace USA.

“Jewish tradition teaches that every human is unique, meaning that everyone counts and therefore every voter should count. American democracy is at a crossroads and the outdated, obstructionist filibuster must no longer stand in the way of debating legislation that protects the right to vote of all Americans and that a majority of people support. Inspired by Jewish teaching and an imperative for federal action, we are holding President Biden accountable to his word to work with the Senate to reform the filibuster and ensure that both the Freedom to Vote Act and the John Lewis Voting Rights Advancement Act receive the debate and vote in the Senate that the American people are demanding and deserve,” said Rabbi Rick Jacobs, president of the Union for Reform Judaism.

Voting rights activists escalated demands for the White House to act on voting rights today, in an action that resulted in the arrests of 59 participants, including leading youth activist Yolanda King, the 13-year-old granddaughter of Rev. Martin Luther King Jr.