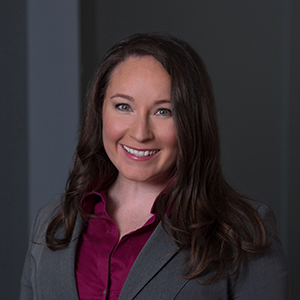 Sarah Courtney is the Chief Communications Officer of the League of Women Voters of the United States, where she leads a team of skilled communicators and marketing experts working to advance progress in democracy and elections.

As a voting rights expert and communications professional with more than 15 years of experience in journalism and public relations, Sarah’s leadership ensures a unified and consistent voice across the organization’s communications channels. Under Sarah’s direction, the League has won multiple awards for website development and public service video production. Sarah has expanded the League’s communications operation from a single person to a dynamic and integrated team advancing the League’s mission through traditional media, digital engagement, and marketing to broad audiences.

Prior to joining the League, Sarah consulted for a number of mission-driven businesses and nonprofit organizations, developing communications strategies and providing media relations support. Sarah started her career in journalism and was a television producer for multiple TV networks, where she covered election politics, Congress, and the White House.

Sarah’s passion for voting rights started early in her life, and she credits her parents for instilling in her the values of community service and civic engagement. Sarah holds a bachelor’s degree in Communication from Fairfield University, where she also minored in Film and Television. Sarah lives in Washington, DC, with her husband and daughter.

The League of Women Voters board president Dr. Deborah Turner issued this statement on the passing of Senator Bob Dole.

Hundreds of voting rights activists escalated demands for the White House to act on voting rights today, in an action that resulted in the arrests of more than 200 participants.

While words are great, President Biden must now do everything in his power to get the Freedom to Vote Act over the finish line and restore the full protections of the Voting Rights Act.

Voting Rights Activists Arrested at White House After Third Direct Action Calling on Biden to Help to Protect Freedom to Vote (Press Release)
Faith leaders, local and state representatives, and national civil rights leaders were arrested in series of actions calling on the Biden administration to protect the freedom to vote.
LWV Statement on Transition of Power (Press Release)

The League of Women Voters of the United States calls on the General Services Administration to fulfil the duties and ascertain president-elect Joe Biden immediately.

A federal judge ruled in City of San Jose, California v. Trump that the president’s executive order to block undocumented individuals from being counted in the U.S. Census is unconstitutional.

League members and volunteers will be hosting more than 850 registration events and virtual activations September 22.