Celebrating Earth Day by Fighting For Our Children’s Health 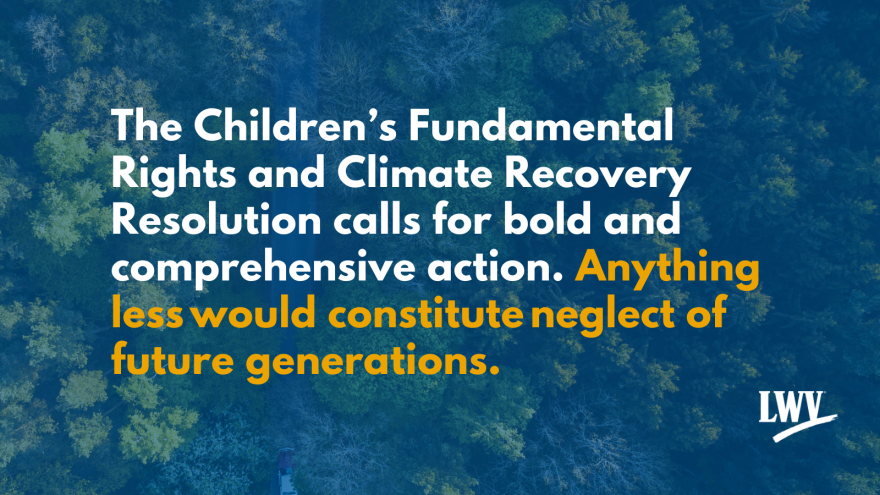 Tomorrow, April 22, 2021 is the 51st anniversary of Earth Day! First celebrated in 1970, Earth Day was created in a world that had few regulatory protections for the environment. The first Earth Day brought together people across the country to champion and raise awareness on environmental issues. It also brought the topic to the forefront of the national conversation and helped establish the Environmental Protection Agency.

The League has worked hard to tackle environmental issues over the decades by supporting measures like the Clean Power Plan and advocating for the Clean Air and Clean Water Acts at the national level. Local and state Leagues have also engaged in this work by addressing resource management and water issues in their communities.

The League has also worked to stand up for communities affected by climate change in the courts, in the case of Juliana v. US, where a group of young plaintiffs argued that it is the job of the federal government to protect them from the damaging effects of climate change. Together, at all levels, the League continues to fight climate change across the country and around the world.

This year on Earth Day, the League continues our fight to protect those affected by climate change by joining Our Children’s Trust and more than 70 other organizations in endorsing the Children’s Fundamental Climate Rights and Recovery Resolution. The resolution will be introduced in both chambers of Congress today and it supports the underlying fundamentals of the Juliana case. It was first introduced in the 116th session of Congress and the League is proud to support it again.

The resolution recognizes our current human-caused climate crisis and the hazards it poses to our children’s health and futures. To uphold the fundamental rights of coming generations, the resolution mandates that the United States develop and implement a bold, comprehensive climate recovery plan. This plan seeks to put the nation on a trajectory consistent with reducing global atmospheric carbon dioxide to below 350 parts per million by the year 2100.

Younger generations are calling on us to go further to repair the harm done by human-caused climate change and protect their freedoms and futures. The League of Women Voters stands ready to follow the leadership of young people in demanding a just climate recovery plan that prioritizes those most impacted, including indigenous peoples, communities of color, and working-class families caught in economic transition. The Children’s Fundamental Rights and Climate Recovery Resolution calls for bold and comprehensive action.  Anything less would constitute neglect of future generations’ constitutional and human rights.

Blog
Redistricting Watch: We Fight for Fair Maps Because We Care About Environmental Justice

A December 2020 decision from the EPA handed permit approval rights to the state of Florida, allowing the state to approve wetland projects without EPA review.  Environmental groups argue that this decision is disastrous for the environment.