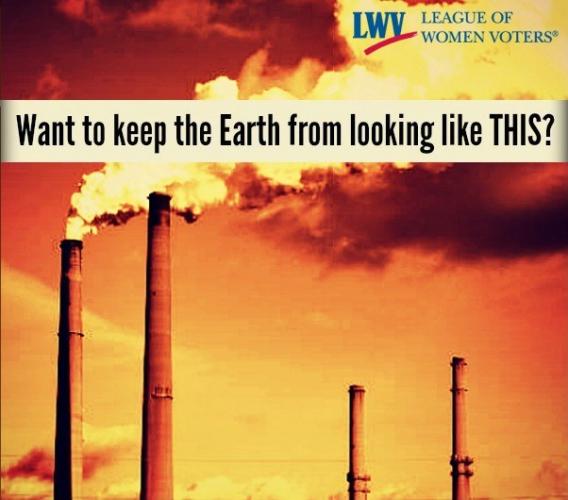 The fight to stop manmade contributions to climate change is not over, we’ve taken big steps in the last year. Last year, when the Environmental Protection Agency (EPA) finalized — the Clean Power Plan — the first ever regulations to cut carbon pollution from power plants, the League rejoiced. Power plants are the number one contributor of carbon pollution, and carbon pollution is the largest contributor to climate change. The Clean Power Plan is the biggest and most ambitious action the U.S. has ever taken to tackle climate change. This long awaited regulation will save lives, improve health, spur economic growth and protect our environment.

Not surprisingly, challenges to the Clean Power Plan from corporate polluters and state governments were immediate. And the ongoing lawsuit over the regulation will probably be tied up in the court system for years. Recently, the United States Court of Appeals for the DC Circuit chose to schedule arguments on the case in front of the full court on September 27. This skips a previously scheduled three judge panel, of the same court, that was set to hear the arguments on June 2. While a decision from the DC Circuit Court is not expected until after the 2016 election, the step still accelerates the case’s path to the U.S. Supreme Court.

Despite the stay on implementation of the regulation, some states are moving forward to develop state plans to implement the regulation in their own jurisdictions. States are responsible for developing and implementing plans that ensure that the power plants in their state – either individually, collectively or in combination with other measures – achieve the interim and final CO2 emission performance rates for their state.

The EPA gives states four “building blocks” to develop the plan for their jurisdictions.  States are not limited to the emission reduction measures covered in these basic foundations. For example, states may –

Now is the time for citizens and Leagues across the country to play an active role in writing state implementation plans. The LWVUS Climate Change task force has developed a working guide for those wishing to get involved at the state level. It’s a comprehensive overview that provides a roadmap to help build support for, and promote compliance with, the Clean Power Plan.