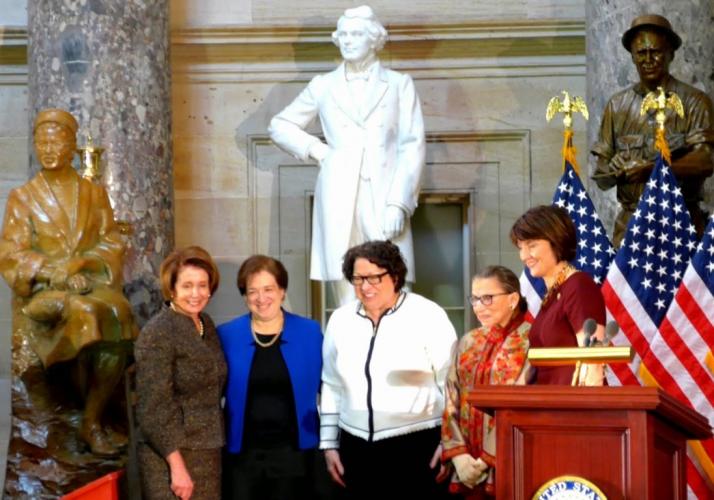 As a part of Women’s History Month, I was thrilled to join a special event in honor of the four women who have served as members of the United States Supreme Court: Justices Ruth Bader Ginsburg, Sonia Sotomayor, Elena Kagan, and retired justice Sandra Day O’Connor.

Held in the impressive Statuary Hall of the US Capitol Building, the three sitting Justices were introduced and thanked by the leading women in the House of Representatives, Minority Leader Nancy Pelosi and Chair of the House Republican Conference Congresswoman Cathy McMorris Rodgers. Unfortunately, former Justice O’Connor was unable to attend. The word “first” was used continually in reference to both the Justices as well as the Congressional leaders introducing them. “It takes a lot to be first: a lot of courage, a lot of commanding respect,” said Pelosi as she kicked off the program.

Justice Ginsburg spoke to a rapt audience on behalf of her colleagues. She spoke of Belva Lockwood, one of the first female lawyers in the country and the first woman to argue before the U.S. Supreme Court. She also noted how Lockwood advocated for women’s voting rights and later ran for president in 1884 and 1888 – pointing out that the Constitution did not prohibit women running for that office, even if it did not allow them to vote!

All in all, it was a very inspirational event. The crowd of women and men of all ages responded so enthusiastically to the mere presence of the Justices that they were mobbed before they could even reach the stage! The event highlighted the amazing capabilities and accomplishments that women can and do bring to public life and the American governmental system.