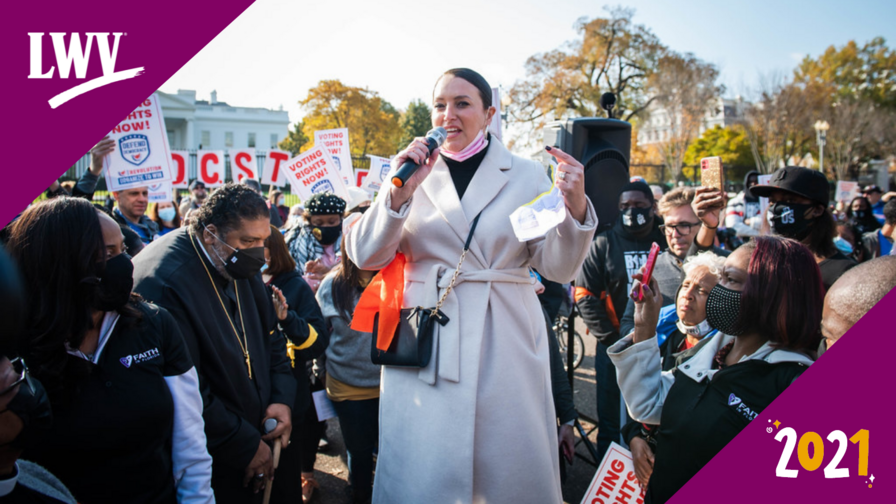 As I sit back and reflect on the year we’ve had, I’m blown away by everything we’ve been through. A health care crisis, attempts to disempower voters, a new administration, racial injustice — it’s a year that has challenged us physically and psychologically.

Despite this, we have not stopped striving to build a better, more just country. I’m thinking of just a few of the things I’ve seen:

As the late, great civil rights activist Bob Moses, who passed this last April, said, “Do what you think actually needs to be done, set an example, and hope your actions will click with someone else.” This year, you did what needed to be done, setting the stage for an even more dynamic 2022.

A People Powered Day of Action

2021 marked the beginning of a once-in-a-decade cycle that decides how (and whether) we’re represented in our governments for the next ten years: redistricting, or the drawing of district maps across states and communities in the US. 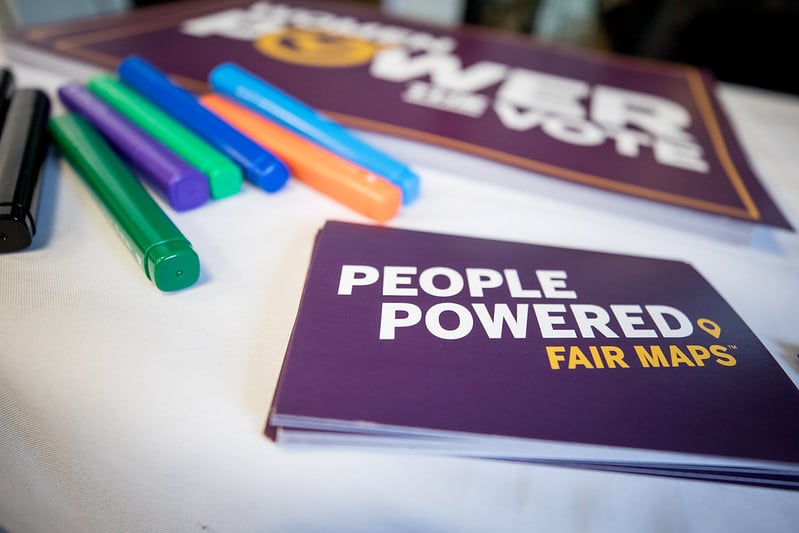 One problem: fair maps are often threatened by racial and/or political gerrymandering, which occurs when politicians draw maps that dilute the power of certain communities while enhancing that of others, typically to support their own political needs. Gerrymandering is often used to silence Black, brown, and low-income communities; in the past year, we’ve seen this in states from Texas to Alabama.

In response, the League has worked to bring the power back to the people, particularly the communities that are most often marginalized. To do this, we’ve worked on a national, state, and local level to get people informed about and involved in the 2021 redistricting cycle.

To this end, on April 29, Leagues across the country engaged in a People Powered Day of Action organized through our People Powered Fair Maps™ (PPFM) program. Over 300 Leagues across 45 states and DC held rallies, webinars, resource shares, and more to empower their communities with knowledge.

In DC, we held a virtual opening rally with live music and speakers from Greenpeace, Fair Immigration Reform Movement (FIRM), and the National Association for the Advancement of Colored People (NAACP). I’m grateful that we were able to partner with these organizations, who know that fair districts, racial equity, and environmental justice are deeply intertwined. When we create our maps, our governments must speak to the issues that define our lives.

You can watch the opening rally below:

Our work didn’t end with the People Powered Day of Action. Throughout 2021, an estimated 180,000+ people participated in our redistricting events. This is an enormous achievement for our PPFM team, whose work with fair maps began just three years ago. I continue to be inspired by their dedication to ensuring that every person is fairly represented.

Redistricting is still underway, so it’s not too late to get involved. Sign up for our PPFM newsletter to stay up to date on community districting news.

A New Way of Engaging in an old Programmatic Focus

As we entered our second century, the League launched Women Power Democracy (WPD), a new way of executing our Campaign for Making Democracy Work®.

The League was founded on the knowledge that women and their allies have the power to change our country for the better. When we’re given the information and opportunities to defend our democracy, the US becomes fairer, more representative, and stronger. What better idea to base our future work on, especially in a time when the voting and reproductive rights of women are under attack?

WPD aims to build a stronger, more representative democracy by:

So many events from 2021 show just how vital these four areas are to our democracy. The January 6 insurrection developed because of rampant mis- and disinformation about the 2020 Election. On the other hand, record participation levels and the empowerment of communities of color led to a historic election in Georgia — which then led to hundreds of bills attacking voting rights. Meanwhile, the maps that are being drawn right now will define our districts for the next decade. These areas could not be more essential to engage in.

As a kick-off for our new focus, the League hosted a conversation with female members of Congress, which I was lucky enough to moderate. After inviting members from all political parties, we were joined by Congresswomen Terri Sewell (AL-7), Jackie Speier (CA-14), Lauren Underwood (IL-14), and Nikema Williams (GA-5).

Highlights and a full video of the panel can be found here.

A Message to the Biden Administration

When he came into office, President Biden called the 2021 attacks on voting rights the “most dangerous threat to voting and the integrity of free and fair elections in our history.” 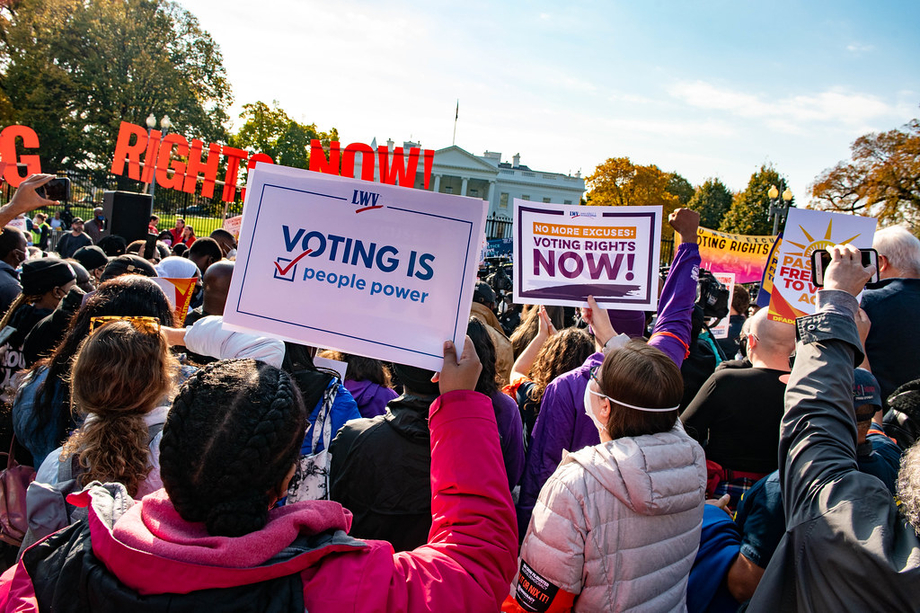 Yet as more than 400 anti-voter bills hit legislatures across the country, the Biden administration failed to step up to promote federal voting rights legislation, thereby leaving millions of people vulnerable to voter suppression, particularly Black, brown, and female Americans.

When the people’s voices are suppressed, we hand power to the politicians in charge rather than everyday Americans. That’s not what our democracy stands for.

That’s why, together with our partners at People For the American Way and the Declaration for American Democracy, we organized a series of five civil actions outside the White House to bring voting rights to President Biden’s doorstep. Hundreds of you joined us in person, while hundreds of thousands tuned in virtually. Folks like Martin Luther King III and his family, Bishop William Barber,  Black women leaders, partners and allies, as well as celebrities like Alyssa Milano and Soleil Moon Frye and her children, and League members from across the country joined me in risking arrest to protect our freedom to vote. We went from five people risking arrest at an early event to nearly 200 at our latest.

The action wasn’t limited to the streets of DC. While we were taken to the police station, thousands of you sent letters to President Biden and Vice President Harris demanding they do all they can to support federal voting rights legislation. Hundreds of thousands of you repeated this message on social media.

Together, we sent a clear message to the White House: the time for excuses is done. We demand voting rights now.

Reflecting on all of these events, there are two issues that stand out to me: racial justice, and who holds power in our democracy.

A democracy is a system of government by the people and for the people. And that means all the people, not just the ultra-wealthy and powerful. Silencing voters, disempowering communities through gerrymandering, and focusing on politicians’ needs over the people’s are antithetical to the very concept this country was founded on.

Almost always, we see these issues compounded for Americans of color. Not a day has gone by when the evil of white supremacy has not been detrimental to our nation’s wellbeing. Racial gerrymandering, voter suppression in Black and brown communities, hate crimes, and threats to our reproductive rights that will have their greatest impact on people of color are just a handful of the problems we’re facing. We cannot afford to ignore these issues in 2022.

As I celebrate all we’ve done this past year, I’m thinking of how we can build an empowered and racially equitable nation, both in our advocacy at LWV and in our everyday lives. We can continue to make our voices heard, demanding our elected leaders support legislation that will make America fairer. We can continue to inspire one another by sharing ways to get involved in the government that is meant to represent us. And we can keep watching, listening, and learning — from our youth, our future leaders, and from the actions we’ve taken together.

I look forward to speaking out, getting involved, and learning more with you in the new year.

On April 29, 2021, the League of Women Voters hosted events around the country to increase public awareness and engagement around the redistricting process, and make sure the public's voice is heard.