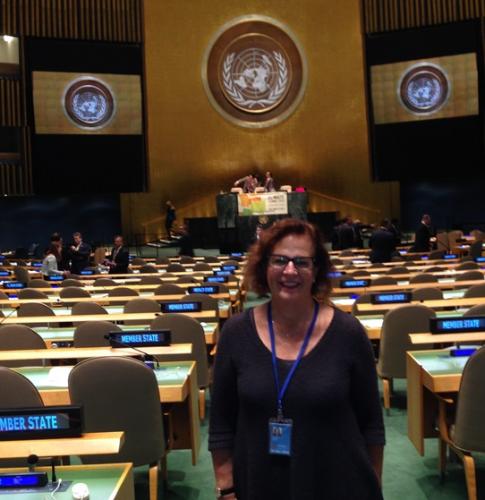 This week, the United Nations (UN) hosted a summit on climate change with leaders from around the world, including heads of state and government, as well as leaders from business, finance and civil society in order to catalyze ambitious action to reduce greenhouse gas emissions and strengthen climate resilience, and to mobilize political will toward achieving an ambitious, legally binding international climate change agreement by 2015. The League of Women Voters of the United States participated with a small group of civil society leaders at the Summit.

The UN started the campaign off on Saturday evening, when Leonardo DiCaprio (Goodwill Ambassador for Climate) was welcomed by UN Secretary General, Ban Ki-Moon at the UN. Sunday saw the People’s Climate March in New York City that brought in over 400,000 people. In addition to the main March in New York City, there were 2,740 additional Marches and events around the world in solidarity. Both the League of Women Voters of the City of New York and the League of Women Voters of New Jersey, among others, were represented in the throngs of people and participated in “Breaking the Silence,” a roar from attendees that broke two minutes of silence. It was an incredible sound and one that I won’t forget!

The Climate Summit’s program started with an Opening Ceremony in the newly renovated General Assembly Hall, where Ban Ki-Moon stated, “We’re not here to talk, we’re here to make history!” This was followed by National Action and Ambition Announcements from countries on their efforts to control climate change. The UN has established the Green Climate Fund (GCF) to provide financing to innovative solutions in developing countries to reduce carbon emissions and achieve a reduction by 2 degree Celsius. Countries pledged reductions in greenhouse emissions and more importantly investment in low carbon resilient development. Brazil shared how emissions have been reduced and garbage heaps have been turned into green space. Denmark’s Prime Minister Schmidt indicated that Denmark will be fossil fuel free by 2050!

Further, under Ban Ki-Moon’s initiation, he has brought the power of the UN to bear by gathering leaders from all sectors to create a concentrated solution. Recognizing that climate change also effects global prosperity, he has concentrated on asking for innovative solutions from the private sector. In the afternoon there were multilateral and multi-stakeholder Action Announcements and Thematic Discussions. I followed the focus on the financial aspects of climate change. According to Rachel Kyte, Vice President of the World Bank, climate change is not only affecting health, it is also driving back economic prosperity: “This is about the reengineering of the global economy. The cost of inaction is significantly higher than the cost of action.” The President of the World Bank, Dr. Jim Yong Kim, articulated the need for the financial sector to facilitate investment in creative solutions. He indicated that there are new “green bonds,” a financial instrument issued by governments as a way to invest in green solutions. Interest is so great by investors that many of these new green bonds are oversubscribed upon issuance!

It was an honor to be able to attend the Summit and to observe these discussions. The League recognizes climate change as one of the greatest challenges of our generation and we are focusing on solutions. Mobilizing our grassroots advocacy forces, we’re vocally supporting President Obama and the Environmental Protection Agency’s proposal for controlling carbon from existing power plants. We’ve collected thousands of signatures (and not by killing trees but by posting online!) in support of the proposal.

This historic summit is an acknowledgement that the world’s response to this problem can’t be just by civil society—it will take a global response from all actors including government, the private sector, scientists, the media and civil society to do our bit. I hope you will join in the efforts in your community – including attending many League’s community awareness programs!