The LWVUS is watching the case and determining how best to support the power of state courts to review election laws.

What is Moore v. Harper?

The US Supreme Court denied the Defendants’ motion for a stay of the superior court’s decision, but ultimately accepted the Defendants’ writ of certiorari, agreeing to hear the case during the October 2023 term.

The US Supreme Court has agreed to consider whether a state’s judicial branch may rule on laws and regulations passed by a state governing the manner of holding elections for senators and representatives and replace them with regulations of the state court’s own devising. This is a legal theory known as the “independent state legislature theory,” which suggests that only the state legislature has the power to regulate federal elections, without interference from state courts. The case will be heard in the fall/winter of 2022, and a decision is expected in the summer of 2023.

What is the Independent State Legislature Theory?

The ISLT comes from an extremely narrow reading of the US Constitution, which states in Article 1, Section 4 that “the times, places and manner of holding elections for Senators and Representatives, shall be prescribed in each state by the legislature thereof.” Proponents of the ISLT suggest this provision means that only the state legislature — the body itself — can set election rules, and the executive and judicial branches in the state have no say in the process.

The US Supreme Court has consistently rejected the ISLT. In Davis v. Hildebrant, a case decided in 1916, the Court upheld a section of the Ohio constitution that allowed the people of Ohio to veto state election laws through a referendum. The Court explained that the word “legislature” in Article 1, Section 4 of the US Constitution refers not only to the state legislatures but also more broadly to any entity with “legislative power,” including the people. After all, the ultimate power to legislate comes from the people, and the people should be in control of their representatives, not the other way around.

The Court most recently rejected the ISLT in Arizona State Legislature v. Arizona Independent Redistricting Commission in 2015. There, the Court upheld Arizona’s use of a bipartisan redistricting commission, noting that “redistricting is a legislative function, to be performed in accordance with the State’s prescriptions for lawmaking, which may include the referendum and the Governor’s veto.”

How Could the Independent State Legislature Theory Impact Democracy?

In Moore v. Harper, North Carolina legislators argue that the state supreme court had no authority to strike down gerrymandered maps because only the state legislature has the power to control federal elections. As noted above, this theory is not new; state legislatures around the country are asking federal courts to decide that lawmakers have unchecked power over federal elections in their state. If the US Supreme Court agrees with the North Carolina legislature, state lawmakers essentially would have free reign to legislate around elections — including manipulating voting districts at all levels and legislating access to the ballot.

The theory — if accepted by the US Supreme Court—could also undermine other well-established and critical checks on legislative overreach, including the power of a governor’s veto and citizen-led efforts like ballot measures and initiatives. Secretaries of State would be constrained in their ability to develop regulations interpreting state election laws. 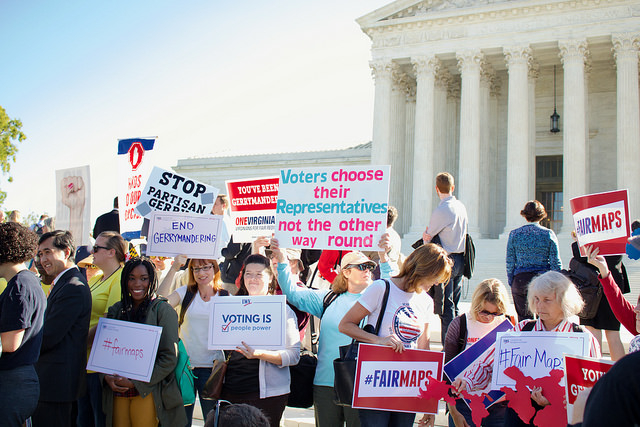 A ruling in favor of the North Carolina lawmakers would also invalidate any state constitutional provision that governs federal elections. Further, depending on the scope of a ruling endorsing the ISLT, prior state court rulings, vetoes, and direct democracy efforts that protected voters and access to the ballot could be overturned. Democracy, as we know it in the United States, would cease to exist.

What Happens if the Court Adopts the Independent State Legislature Theory?

Adoption of the ISLT by the US Supreme Court would be a threat to our democratic values and institutions. It would reinstate congressional maps that the North Carolina supreme court struck down as an extreme partisan gerrymander, and those illegal maps would be in use for future elections in the state. Because the ruling would have national reach, state legislatures around the country could use district maps that have been struck down by a state court or vetoed by the Governor. State legislatures could also call into question maps that were drawn by an independent redistricting commission.

For the foreseeable future, a state legislature could gerrymander freely to protect the party in power, and no court — not even a federal court — could stop it.

In 2019, the US Supreme Court ruled that federal courts cannot hear challenges to district maps engineered to protect one political party and directed litigants to state courts for relief. A ruling in favor of the North Carolina legislature in Moore v. Harper would eliminate all paths to judicial relief for people who are harmed by partisan gerrymandering. Politicians would be in total control of who votes for them and how.

The people of the United States have made it clear: we do not want our politicians choosing their constituents. Nearly two-thirds of Americans support removing state legislatures from the redistricting process and handing that power to independent commissions to prevent partisan gerrymandering. But as seen this past redistricting cycle, state lawmakers are determined to hold on to power, particularly in the South and states with growing communities of color (who are disproportionately threatened by illegal gerrymandering). And without the protections of Section 5 of the Voting Rights Act, there are far fewer avenues to protect fair maps.

In addition to unchecked power to redistrict, avenues to challenge harmful, burdensome, and discriminatory state voting laws would dwindle. States could legislate all aspects of elections, and voters would have little recourse. This would have a devastating effect on voters and those seeking to defend and protect the right to vote.

Support fair districts in your community by joining your local League!

According to the Brennan Center for Justice, since the 2020 general election, 39 states have proposed at least 393 laws that would harm the political participation of residents, including at least 148 laws in 27 states that would allow for partisan interference with the elections process. Should the ISLT become law, anti-voter laws enacted by state legislatures would not face scrutiny from the state’s governor, the state’s highest court, or a people’s referendum. The only recourse would be filing litigation in federal court, which is expensive, time-consuming, and, in many states, increasingly unfriendly to voters.

Where Do We Go From Here?

We await the hearing in Moore v. Harper this fall and a decision next spring or summer. The LWVUS is watching the case closely. Regardless of the outcome, residents, voters, and LWV members must continue to engage in the political process on all levels of government.

We saw how powerful residents were during the 2021 redistricting cycle, demanding a transparent process and fair maps. Communities must continue to use a collective power to ensure that those who represent us in government truly represent the interests of their constituents — not solely their own. If the ISLT is adopted, the power of the people to direct and reform our society will be more important than ever.

The League's Impact on Redistricting

LWV of the United States and League chapters from all 50 states and DC filed an amicus brief in the Moore v. Harper case before the Supreme Court. The case concerns the so-called “independent state legislature theory” (ISLT), which, if adopted, would have far-reaching implications for the future of American democracy.