What Happens When More than 400,000 Advocates Rally to Save Our Planet 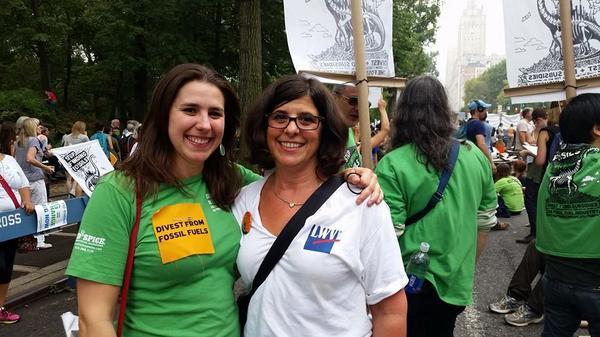 EDITORIAL NOTE: This guest blog post was written by Toni Zimmer, president of the League of Women Voters of New Jersey

From the moment I stepped onto the bus headed to the People’s Climate March chartered by the Sierra Club, I knew this was going to be an extraordinary day. The People’s Climate March was being held in advance of the United Nations (UN) Climate Summit where world leaders were coming together to find meaningful, action-oriented solutions to fight climate change. Our bus captain was a dynamic woman from the Sierra Club who never seemed to run out of energy, and a dedicated advocate for just about every environmental cause you can imagine. I found an empty seat with Michele, another member of the League of Women Voters of Sussex Highlands.

It took us about one hour to reach the Lincoln Tunnel and make our way through the darkness and into the brilliant sunlight of the city. Once in the city, we had plans to meet up with League of Women Voters of New Jersey vice president of advocacy, Nancy Hedinger. The bus meandered its way through heavy traffic as we headed uptown. People on the bus were beginning to speak just a little bit louder, their voices a tiny bit higher. We were getting excited. I turned to Michele and said, “I feel like a kid – ‘Are we there yet?’” We laughed.

Once we arrived, it seemed sensible to take the subway to one of the main staging areas for the March. When we stepped off of the subway and made our way to the street, we were in awe of the magnitude of people, some already lined up within the wide area solely cordoned off for those who were ready to march. Others crammed together on the sidewalk and strained against each other in the side streets, angling for position to make headway toward the coveted center margin area where they would eventually be part of the March. “Wow,” was all I could muster. I looked around at the endless sea of faces, listened to the constant tune of chatter and chanting, and I knew, we wouldn’t be marching together with other League members in attendance, including LWVUS Board member and UN Observer, Rosalee Keech who would attend the UN Climate Summit. But we were all there. United and connected as kindred spirits. Ready to represent the League of Women Voters as one, to show our support to the world for this historic effort.

You Feel the Goodness…

This was turning into something bigger than I could have ever imagined. I had been to events, rallies, including last year’s 50th anniversary March on Washington. But this was different in so many ways. There were people here who were so like-minded, and they had no personal agendas, other than to see to it that they, their families and the future generations of our planet would have a chance to survive. And they were determined to march for more than two miles beneath the glare of the hot sun to prove it. These were good people, and we were all there for the same reason. Yes, I felt the goodness that day.

Police officers stood guard around the perimeter of the barricades that separated the people who were lined up and ready to march, from those who were packed in on the outside - observing or, in some cases, begging the police to move the barricades aside to let them in. We took pictures of colorful banners and people with signs that spoke of the horrors in store if we didn’t bring about change.

We didn’t see any celebrities or famous politicians that day. We missed spotting Sting, New York City Mayor Bill DiBlasio and Leonardo DiCaprio. The truth is, the people carrying the signs, the ones who chanted and walked for miles with hope and conviction in their hearts and smiles on their faces, those were the true stars. Each one a unique part of humankind that made the People’s Climate March so special. I’m truly grateful to have been a part of that.