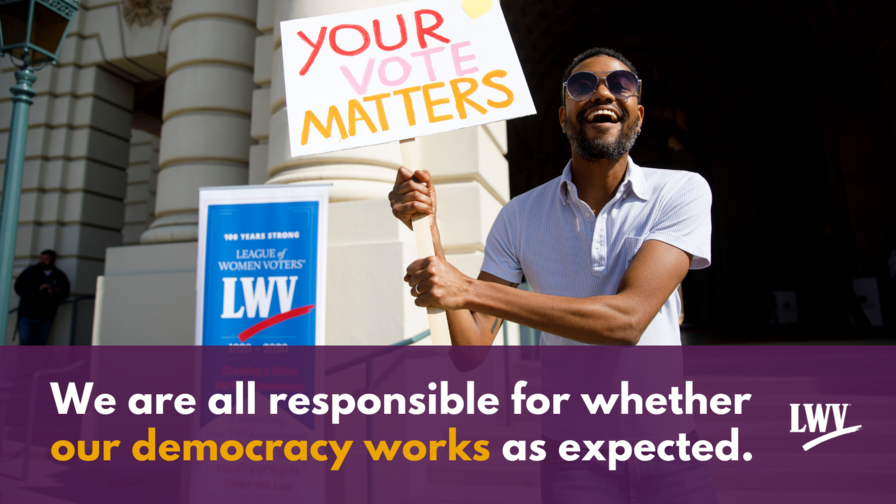 The Fight for Voting Rights: Then and Now

The Voting Rights Act (VRA) was signed into law 56 years ago on August 6, 1965, by President Lyndon B. Johnson. It was a proud day in American history. The Act outlawed the discriminatory voting practices adopted in many southern states after the Civil War, including literacy tests required to vote. But the history to get to this point was stormy and full of thorns. And today, we have neither tamed the storm nor nipped the thorns still present as we work towards the American dream of life, liberty, and justice for all.

This year, I hope to remind us of the history around one of the most transformative laws in America, discuss where we are now, and share a plan for the present and hope for the future.

Despite the ratification of the Fifteenth Amendment in 1870, African Americans in the South faced tremendous obstacles to voting. Very few were registered voters, and African Americans had little political power locally or nationally. During the Reconstruction period, the Thirteen, Fourteenth, and Fifteenth Amendments empowered African Americans with freedom, citizenship, and the right to vote. However, these three amendments were often out of reach for those who needed them, and a series of reconstruction era attempts to enforce the 15th Amendment was struck down by the Supreme Court in 1883, ending the federal government's efforts to protect civil rights for decades.

This ruling spurred Jim Crow laws that codified the previously private, informal, and local practice of racial segregation in the United States. In an 8–1 decision, the landmark ruling struck down the critical provision in the Civil Rights Act prohibiting racial discrimination in public places (such as hotels, restaurants, theaters, and railroads), what would later be called “public accommodations” law.

To make matters worse, the ruling barred Congress from remedying racial segregation and effectively legalized the notion of “separate but equal” that would dominate American society until the Civil Rights Act of 1964. It was a destructive blow to the rights of African Americans. Then, in the 20th century, the tide started to turn as more cases came before the High Court with consistently compelling fact patterns.

One example was in 1917 in Buchanan v. Warley, where the U.S. Supreme Court struck down a Kentucky law enforcing residential segregation. The Court unanimously held that a Louisville city ordinance banning the sale of property to Black people in white-majority neighborhoods or buildings, and vice versa, violated the Fourteenth Amendment's protections for freedom of contract. As case by case built greater protections, what followed was the beginning of the civil rights movement.

Throughout the 1950s, the civil rights movement galvanized the nation. Congress passed Civil Rights Acts in 1957, 1960, and 1964, but none of these laws were strong enough to prevent voting discrimination by local officials.

the ruling barred Congress from remedying racial segregation and effectively legalized the notion of “separate but equal” that would predominate in American society.

On March 7, 1965, peaceful voting rights protesters in Selma, Alabama, including the late John Lewis, were violently attacked by Alabama state police. News cameras filmed the violence on what became known as “Bloody Sunday," leading many Americans and members of Congress to question whether existing civil rights laws could be properly enforced by the local authorities. The question before Congress was whether the federal government should guarantee the right to vote by assuming the power to register voters. Since qualifications for voting were traditionally set by state and local officials, federal voting rights protection represented a significant change in the balance of power between the states and the federal government.

This “act to enforce the Fifteenth Amendment to the Constitution” was signed into law 95 years after the amendment was ratified. In those years, African Americans in the South faced tremendous obstacles to voting, including poll taxes, literacy tests, and other restrictions. They also risked harassment, intimidation, economic reprisals, and physical violence when they tried to register or vote. As a result, very few African Americans registered to vote, further limiting their political power.

In 1964, numerous demonstrations occurred, and the violence that erupted brought renewed attention to voting rights. The murder of voting rights activists in Mississippi and the attack by state troopers on peaceful marchers in Selma, Alabama, gained national focus and persuaded President Johnson and Congress to initiate meaningful voting rights legislation. The combination of public disgust at the violence and Johnson's political skills motivated Congress to pass the Voting Rights Act (VRA) on August 5, 1965.

In 2013 there were new, intense attacks on the Voting Rights Act. Shelby County v. Holder was a landmark case addressing the constitutionality of two provisions of the Voting Rights Act of 1965: Section 5, which requires certain states and local governments to obtain federal permission before implementing voting laws or practices; and Section 4(b), which contains the formula for determining which jurisdictions are subject to federal permission based on past voting discrimination.

The League implored the Supreme Court to uphold Section 5, as otherwise, it would erase 50 years of progress for marginalized voters. LWVUS and the League of Women Voters of South Carolina joined an amicus brief to signify our support for Section 5 and ask the Supreme Court to uphold the lower court’s ruling. LWVSC also signed onto a state brief that addressed how Section 5 helped implement and clear a Voter ID law in South Carolina.

The Court ruled against our interests. On June 25, 2013, the Court ruled by a 5-to-4 vote that Section 4(b) was unconstitutional because the formula was based on 40+-year-old data, making it no longer responsive to current needs. The League was vocal in our disappointment in the ruling.

The State of Voting Rights Today

Following the Shelby County decision, a slew of anti-voting laws passed. And in some states like Texas, Mississippi, and Alabama, some laws were passed within hours of the decision. As described by one voting rights organization, “the decision in Shelby County opened the floodgates to laws restricting voting throughout the United States. The effects were immediate. Within 24 hours of the ruling, Texas announced that it would implement a strict photo ID law. Two other states, Mississippi and Alabama also began to enforce photo ID laws that had previously been barred because of federal preclearance.”

More recently, with the record turnout of the 2020 election, more than 43 states introduced anti-voter legislation in 2021. According to a recent report, between January 1 and July 14, 2021, at least 18 states enacted 30 laws that restrict voting access. These laws created more barriers to the ballot box and made it harder for voters to cast their ballots. Such barriers have a detrimental impact on voters of color.

Legislation like the For the People Act and the John Lewis Voting Rights Advancement Act (VRAA) have been proposed to curb recent voting restrictions and make the vote fair and secure for all. The VRAA in particular would restore several important components of the Voting Rights Act of 1965. However, both bills face tough opposition in the Senate and need all the support they can get.

From the historical barriers to voting and the Shelby County decision, to the rise in contemporary anti-voter laws, voting rights are still very much under siege.

How to Promote Voting Rights NOW

A few of ways we can promote voting access are to:

One way to do all of these things is by joining your local League, which will be up to date on all the barriers your community is facing and efforts to overcome them. Leagues across the country advocate and educate around local issues that impact communities like water, infrastructure and roads, healthcare, and education. Our advocacy around issues has evolved over our 100 years, but our core focus on creating a productive democracy remains the bedrock of the League's nonpartisan advocacy.

You can also promote voting access by checking out and sharing our voting tools from VOTE411. VOTE411 is a free, online resource that provides information on voter registration, local candidates, how to reach the polls, and more. It's available in both English and Spanish.

Finally, there is no cavalry coming. We must all decide whether we will be a spectator or, as Teddy Roosevelt famously said, "dare greatly" as the person in the arena. That means we are all responsible for whether our democracy works as expected and whether our communities gain the resources needed. A functioning democracy and healthy communities come down to our commitment to being in the arena. So, whether we’re supporting federal legislation such as the For the People Act or working to reinstate the Voting Rights Act through the John Lewis Voting Rights Advancement Act, we all must get in the arena and fight for voting access.

Will you join us in the arena? Onward!

We applaud President Biden for elevating the need for the For the People Act and we urge him to use the full weight of the presidency to see this bill become law.

Press Release / July 13, 2021
Senate Fails to Pass the For the People Act – Democracy Hangs in the Balance

The League of Women Voters supports legislation that strengthens our elections and increases voter participation so that every voice is heard in our democracy.

We thank President Biden for calling on Congress to pass the For the People Act and the John Lewis Voting Rights Advancement Act, and we echo that call.