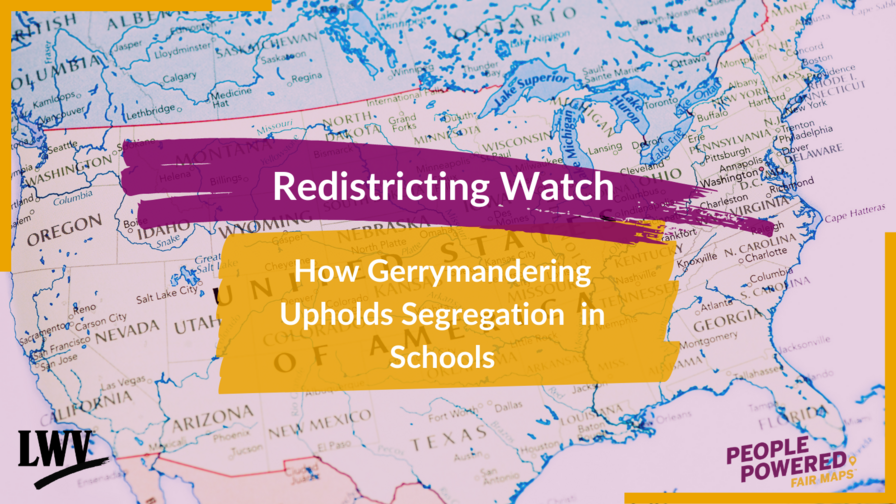 For over 200 years, the United States has worked through its own interpretation of “we the people,” the first three words of our constitution. Although the phrase has evolved, its core meaning has always remained the same: “we the people” was intended to make it clear that America’s voters are ultimately the drivers of their government. And just like the constitution is a living document, ever-changing, so are those three words.

In 2021, we’re asking how “we the people” can ensure our voices are properly heard. Following census counts, all fifty states and Washington, DC will draw new maps for their federal, state, and local districts. If done correctly, this is an opportunity to craft a more equal and accurate body of representation. Yet if history is any indication, political gerrymandering has a good chance of succeeding.

This would be detrimental in many areas of our lives, including public education. School boundaries have been gerrymandered in much the same way as congressional districts. The difference between the two is that political gerrymandering reinforces a party’s political power and reduces the voting power of minorities, while the gerrymandering of educational boundaries creates and worsens existing inequities surrounding access to educational opportunities and racial segregation in our public schools.

Segregation in public schools began its long fight in 1954 with Brown v. Board of Education, but the truth is that actual desegregation is still incomplete in many districts across the United States. The immediate response from school districts in the post-Brown era was to draw attendance zones to intensify segregation and phase out integration efforts. Today, evidence from current zoning studies show that this harmful practice of drawing racially unbalanced boundaries continues.

We have an opportunity to...[make] sure that our history of segregation is acknowledged and actively countered in the redistricting process.

While the issue of present-day segregation is entangled in many others, such as discrimination, income disparities, and racist housing policies, it is noticeably upheld by gerrymandering. Gerrymandering often divides voting districts and neighborhoods based on income; since Black and brown Americans are disproportionately affected by poverty, this leads to segregation along economic lines. Racial gerrymandering, or the drawing of maps to empower or disempower certain racial groups, worsens the issue. This political discrimination directly affects how families are or are not represented in the educational system.

Redistricting gives us an opportunity to increase diversity in schools through greater integration. Drawing conscious boundaries is a way for leaders to remedy past discrimination efforts and highlight the true diversity of their districts. This is especially important as we work to recover from a global pandemic that has worsened the systemic inequities faced by Black and brown Americans since the country’s start.

How You Can Get Involved

We the people have always been the ones to move the needle forward by expanding who is recognized by that phrase. We now have another opportunity to do so by making sure that our history of segregation is acknowledged and actively countered in the redistricting process. Redistricting is the literal drawing out of our access to opportunities and resources for the next ten years; we have a duty to make it fair.

Education is a key driver of individual mobility, and we must advocate on behalf of all children, regardless of their make-up or background. We can do this by actively taking part in redistricting. Here is a list of a few ways that you can get involved:

The fight to create a truly equal nation is far from over. Let’s use this opportunity to make our schools, and communities, more just.

Blog / March 3, 2021
Redistricting Watch: I Will Fight for Fair Maps Because I'm Against Prison Gerrymandering

Prison gerrymandering is the practice of counting people based on where they're confined rather than where they're from. This inflates representation in areas where prisons are built and dilutes the voting power of the people who are incarcerated and their home communities.